New management means change in all areas. We should see a major overhaul of the minor league roster next summer, and this year tweaks are taking place in the minors, too. One of the recent adjustments involved Joey Laleggia, former Penticton Vee and Denver Pioneer defender. He spent some time at forward during December, and was impressive. Perhaps he will emerge as a throwback ‘utility’ player who can help front and back. There is a long way to go before we have our answer.

None of the men ranked No. 17 on the winter list have played 100 NHL games. I am not familiar enough with other franchises to know if any of them have the kind of depth required to deliver legit players from these depths, but my guess is that kind of depth is rare if it exists at all. 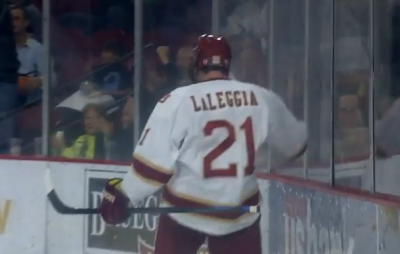 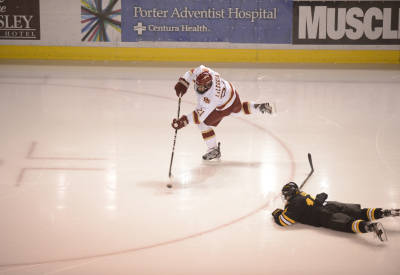 PREVIOUS RANKS ON THE TOP 20

Laleggia’s ranking has seen a wide range over his four years, mostly because he is a difficult player to slot. Clearly one of (if not the) best offensive defenseman on the list, it would be folly for me to suggest there is any real knowledge of his ability to play defense in pro hockey. College kids are very difficult to project, and in fact the Oilers themselves have had a difficult time figuring out if they like this player type.

Laleggia has an attractive resume as he enters pro hockey but there are things that make him a question mark for an NHL career. Edmonton has shown an increasing bias toward size among their defensemen, and are procuring substantial talents at the position.

In order for Laleggia to push through to the NHL he will need to prove two things. First, an ability to defend despite a lack of size. Torey Krug managed it for Peter Chiarelli’s Boston Bruins and the two men are basically the same size.

Second, Laleggia will need to show he can make a difference offensively—including power play. Everything on his resume implies he is bona fide in this area and this year he needs to show it at the pro level. He is not a lock or even a strong bet, but he owns an AHL job and has an organization that continues to invest in him. After that, it is about hard work, luck, good health and endurance.