The Edmonton Oilers have reached a point where fans can be genuinely disappointed by an effort that would have been considered usual fare not so long ago. Ahead 3-1 last night, they stepped into an elevator shaft and blew a winnable game. They have major issues, including a momentum-killing power play and a problem with pressure. It is December 28: They remain in the conversation for the playoffs, but last night’s win makes draft talk in January far more likely.

It will be a damn shame if the Oilers can’t grab at least one win in their last two December games (Los Angeles and Anaheim). There will be better days ahead—the IR has exceptional quality—but the club has shown impressive resilience in this first half of the season.

Brad Hunt is on the roster and will play soon, suspect he will receive plenty of power-play time. Who comes out, based on merit? Nikita Nikitin and it is not close. I believe NN’s deadline trade value is something akin to ‘Nikitin and a second for a third’ with Oilers keeping some of the money. The Oilers biggest issue (imo) this morning is the power play, and Hunt should help with that hammer.

A very nice recovery evening from Nugent-Hopkins, skated miles, posted two assists (one a dandy) and spent 5:16 against Gaudreau (going 7-8). He was 30 percent in the dot, but overall this was a solid effort. Leon Draisaitl also had a positive outing, getting an assist on the Purcell goal. He isn’t on fire currently but still has an impact. Mark Letestu is bringing a consistent level of play now, the veteran (like many Chiarelli hires) seems to have settled in. His speed is exposed on a night like last one, but for me there is value in this player. Anton Lander was the only regular C at 50 perent on the dot, and battled the Bennett line to 6-3 Corsi events at 5×5. A good night from the centers to my eye.

This is a Glen Sather move all the way. Zack Kassian brings issues to his new team (described briefly here) and the Oilers fanbase is going to be asked to adjust their thinking on this player. On the negative, he has a back story that would have had Steve Tambellini puking into a bucket dawn to dusk. There is also the Sam Gagner stick-swinging assault to deal with and Kassian’s poor display of sportsmanship that followed it.

Once beyond that mess, we have a somewhat unique hockey player. He is 6.03, 214, can win battles along the wall and in front of the net, and is a world class agitator. He can fight, and has real skill (12.86 even-strength goals per 82GP in the NHL) and is the definition of a power forward. Since Edmonton doesn’t have one, Kassian goes to the top of the table.

Adding Kassian brings competition to the RW position and it is my belief we could see him on a skill line as soon as he is ready (Kassian hasn’t played since last season) in Bakersfield. Will he ever play for the Oilers? Yes. Will he have success? There is a very good chance. Will he conquer his demons? One always hopes for it. Can we cheer for him? Let me get back to you.

He came to us in times of trouble and for a time stilled the waters. Playing goal for Team Chaos is a giant task and Mr. Scrivens could not sustain the confidence and performance, becoming another in a long line of goaltenders crushed under the incredible weight of playing Oilers goal.

Year two of his deal featured the humiliation of being sent to the minors and toiling in a lesser league. I didn’t hear one complaint from him and he delivered solid netminding once he got established (.957, .921 and .923 last three Condors outings). 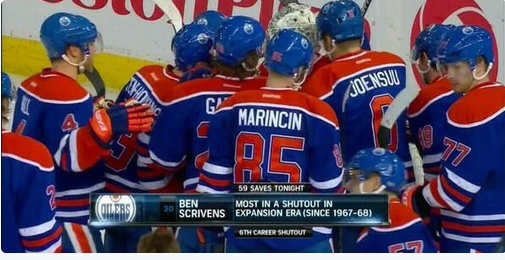 You remain a unique personality in the game of hockey, and we will follow your career in Montreal. There is quite a collection of former Oilers there, suspect one day you will be able to laugh about your experiences in Edmonton. I hope you earn an NHL contract for next season and build your career back to previous levels. Don’t become one in a long line of players who lost their NHL careers because playing for the Oilers sewered value. Seize the day, Ben Scrivens. Grab that rope and start climbing. Sail on, Ben Scrivens. All the best.