If you were to write a musical score for these first 40 games, it would have to include the highest highs, and the lowest lows—and every note in between. From dog whistles to the fog of wart, it has been remarkable and fatally flawed and the only thing that can save it is a watershed second half and a ringing playoff epilogue. Too much? Of course. Hope dies last.

If the Oilers win, they would reach the halfway point of the season with 37 points—well short of hoped, but 10 points clear of 2014-15 (Edmonton would fall 4-2 to Detroit in G41). I remember that game, Viktor Fasth stopped a lot of shots but Benoit Pouliot took a spearing penalty late and that was all she wrote. If this thing never turns north, what will we do to mark the occasion? Exactly.

Coach McLellan says @Klefbom93 is dealing with both an upper-body and lower-body ailment, return not expected in the short term.

You could live happily with the three sets of numbers that lead off for Edmonton at center. All three men should be over 2.00/60 at 5×5 and could be over 4.50/60 at 5×4 by the end of the season. At some point, the Oilers will move someone off to the wing (Poo has been taking some of the Nuge’s faceoffs lately, maybe our man is having trouble adjusting to the new face-off rules) but for now it is fun to imagine this trio for the next decade.

I wonder if a guy like Kassian makes it more likely they run these guys at center. Hall, Eberle, Pouliot, Purcell and Yakupov are a costly bunch ($23M!), but if you could save a little on Purcell’s contract and bring in (an effective) Kassian? Is $23M too much for your top six wingers?

ARE WE THERE YET?

Okay, so he practiced the other day? What didn’t he do? Did he take part in all the drills, full contact? If he did, we are talking days not weeks, no? What am I missing, hockey people? If he takes warmups tonight, will the Oilers acknowledge it? Will Edmonton fans get the vapors? Will this blog stop posting at 8:30 and 5? Stay tuned! 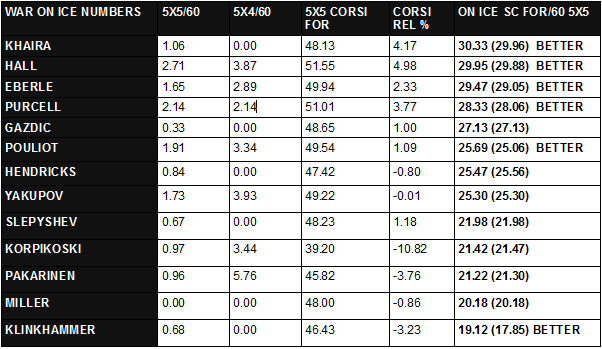 As is the case with McDavid, Leon, Nuge, if you look at the Hall and Purcell numbers, notice the improvement in Pouliot and Eberle (especially 5×5/60) and remember Yakupov is coming back? That is eight men, with a power forward (of some type) on the way. The forwards could be set by the time the swallows come back to Capistrano.

Or do you want to see Eberle with McDavid for a time?

I watched most of the two games this weekend, and Kassian looked good on the potato feed from Mars. He is certainly fast enough, strong enough, and skilled enough to play a big role in the AHL, and his NHL numbers (per 82gp he is 14-13-27) suggest he has way more skill than previous tries by Edmonton to grab this player. He is not Bill Guerin, and there is still some forgiveness to be earned (not just the stick to Gagner, but the ghastly behavior in the following meetings).

Based on what I saw this weekend, and what we know of this player, as a hockey risk this was a solid bet that could pay off in grand fashion. Another power forward who might be in play is young Kerby Rychel, buried in the AHL but scoring at a nice clip. Aaron Portzline reports on what has been an issue for some time, and young Rychel would certainly be on the radar for Peter Chiarelli’s rugged kind of fellow procurement list.

These things seem to be happening with more frequency, and in Tampa Bay there seems to be a story every few months involving unhappy players. Unlike Martin St. Louis and (soon) Steven Stamkos, young Drouin has limited options. His agent has now gone public on the player’s behalf, and things could get ugly. Edmonton had a similar (although not identical) situation with Nail Yakupov, the difference being the young Oiler always professed his wish to stay. I love Drouin’s skill set and believe he could thrive on the wing in Edmonton. Among the current portsiders, I would rank his potential with any not named Taylor Hall. I think it more likely Peter Chiarelli trades for a Rychel than a Drouin, but love the idea of having his talent on the Oilers. Could you have another small winger on this team? Well, I think the talent dictates you look at it for sure, and Drouin could be productive without being expensive for a few more seasons. Something to consider. As for attitude? Don’t know, but lordy there is a lot of smoke surrounding the Lightning. 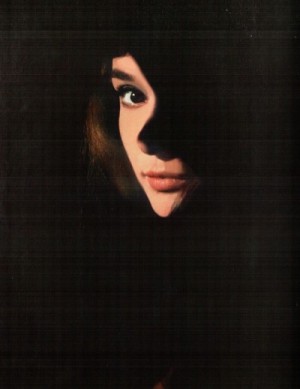 This morning at 10, TSN1260. We have only one hour between the two WJ games, so tune in for two hours worth of discussion in one (I will talk fast, promise). Scheduled to appear:

OFF THE RAILS ON A CRAZY TRAIN