In the end, it was not to be—and that is a good thing. The job of a general manager is to deal from strength to address weakness, and in Edmonton’s case that may make Ryan Nugent-Hopkins available in the spring of 2019—you can’t hurry maturity and it is unfair to continue sending teenagers into the breach. Not trading the Nuge to Nashville was the right thing to do.

The Oilers get some impressive offense from this crew on the power play, the numbers for the centers are exceptional with the man advantage. Here are the PP totals and NHL rank among all centers:

Of course, the most common game state—and the most difficult one to deliver offense in—is at even strength. Here are the EV totals and NHL rank among all centers:

Leon has been incredible, the combination of Hall-Draisaitl is a major story this season—would love to see them in the playoffs someday soon. Nugent-Hopkins’ numbers look good from here, and of course McDavid was outstanding before injury and I imagine he will push hard upon return. Loaded at center, folks—just need experience. Never fear, Nuge turns 23 in April.

A quick note: I would not have made the trade for Seth Jones, and the contract Edmonton has in their pocket for Nuge gives him extra value. I would not trade Nuge straight up for Ryan Johansen, although for me the new Nashville center is a more valuable player today. Contracts and control matter, folks.

BLUE TARGETS (WITH AN EXPLANATION)

During the stretch run, it will be interesting to see how a few UFA defenders perform. Here are some blue I will be watching between now and the end of the regular season. 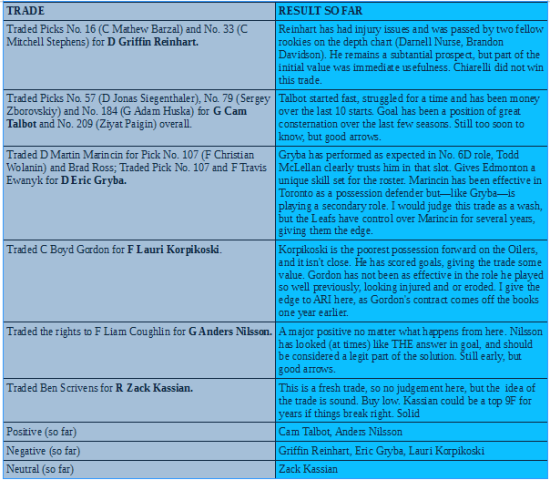 I think that’s a fair assessment so far. I give Chiarelli enormous credit for addressing the goaltending situation and avoiding a 35-year-old, $6 million goalie via free agency (the Ryan Miller plan) and the Nilsson kicker is a flat-out steal. Less enthralled with his other summer deals, especially the Reinhart trade, but it is probably true that I overvalue draft picks.

I am heartened that we can see the vision here (exception: Korpikoski trade), as PC is knocking down problems in the order that logical and reasonable solutions present themselves. I would have hoped he would be more aggressive on the defense, and if he was trading what amounted to a top-10 pick, a more immediate solution was necessary. That said, projecting prospects isn’t an exact science and Brandon Davidson was not an obvious candidate to do what he did this season. I’ll call him innocent, with an explanation. Fair? Or do you believe he failed completely? A case could be made for that you know, his showcase deal is in the minors.

"This is my last chance. I know that. Peter took a chance on me and it is up to me to show him it was the right chance." Kassian #Oilers

Jason’s interview was exceptional, Kassian came across as genuine and real. I am not here to advocate for anyone, but can say that in my life I have seen a lot of lives ruined by these kinds of issues. Although second and third chances should not come easy, once given the hope is for success and a return to public life. I wish this for Zack Kassian. Sincerely.

It is always interesting to see how issues are framed. Above, I told you my take on the Seth Jones deal (the Jackets got fleeced, folks) in regard to last evening’s trade. I mentioned that it is folly to trade Nuge and leave barely 20 Leon and teenage McDavid in charge of the wheel. Others have differing views:

Matty wanted this trade, that is my take. I would vehemently disagree with the idea Edmonton had the depth, and would add a line in there about Jones being unproven. Folks, this wasn’t a trade to make. If Peter Chiarelli announced yesterday he had dealt Nuge for Jones—with no veteran C coming back—I would have hammered him senseless on this very page.

You cannot go fast enough to get there early. I think that criticism applies to the Griffin Reinhart deal, and sure as hell would have applied to Nuge-for-Jones. Jim Matheson missed the mark. There is nothing to see in this (non) trade, beyond a capable GM doing his job properly. That’s your lead, above and below the fold. The story this morning is that Jarmo Kekalainen is one step closer to being a scout again.

This morning at 10, brimming with topics! TSN1260, scheduled to appear:

START AS YOU MEAN TO GO

243 Responses to "THE WORLD IS TURNING AS IT SHOULD"