The Edmonton Oilers still have half a season to play, but the news yesterday that Connor McDavid and Oscar Klefbom won’t return in January casts a pall over the remains of the day. I think most of us felt if this team could hold on until the troops returned, maybe there was a significant run in this young and so very talented group. Despite some Herculean efforts by Taylor Hall, Leon Draisaitl, Andrej Sekera and (increasingly) Cam Talbot, it gets tougher to justify with so many pieces missing. Remember when I talked about (lack of) balance in the summer? Remember when I said the balance picture would have to wait? We all knew it was true at the time, but this is what lack of balance looks like.

G43 a year ago was a 4-2 loss to the Florida Panthers, as Roberto Luongo decided to remind us of lost nights in Vancouver. Edmonton finished December 7-6-1, representing progress (at or over .500, depending on your view of things) and if they bring this month in around the same number it will be pure mastery by Todd McLellan. 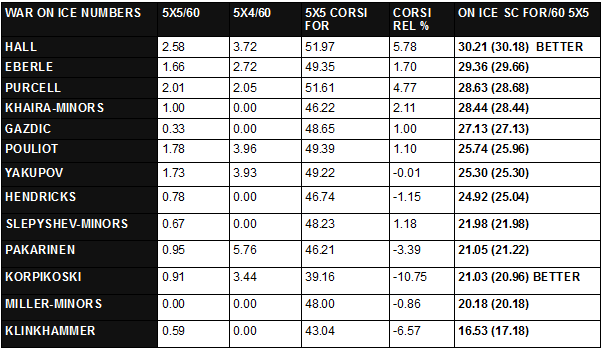 I have no explanation, but when the calendar turns each season, it seems some players come out of their skates to make themselves known. Here are the Condors boxcars since the new year:

Interesting group, led by some outstanding goalie performances (1-2-1 in this stretch, despite stopping 137 of 146 shots, .938). Interesting group at the top, worth following as January stretches to spring. I want to know this: How many of these cats are fast enough for the McLellan style? If David Musil (as an example) isn’t fast enough, Peter Chiarelli should get him over to an organization that might be able to use him.

The Oilers are five points behind the final playoff spot now, there is no help coming and Hunt—Gryba will be a pairing this evening. Despite monumental talents in some areas of the roster, the lack of balance on this team once again has us sailing for the hinterlands. It is empty to promise you good times ahead, I will only say we should be in a far better place a year from now.

And with that, if the Oilers lose tonight in regulation, I release you. Please feel free to enjoy the beauty all around us, whether that includes photographing hoarfrost on a cold January morning  or catching the new Star Wars movie with a friend or loved one (something I hope to do this week, so if I unfollowed you on twitter it is because you were giving away the damned plot).

For this blog, I will continue to post gameday and followup (next morning) blogs, and will sift in draft coverage more and more—plus trade deadline items as they appear. Drop in when you can, let us know you’re okay. Next year, perhaps the playoffs.