Nail Yakupov may be in tonight’s lineup for the Edmonton Oilers, and that is very good news. A terrible bit of poor luck (and a damned stupid bit of friendly fire) cost the young winger some very important time in a vital season for him. Hopefully clear sailing from here.

A year ago G44, Edmonton lost (again) 4-2 to St. Louis with just 15 shots on their net. The Oilers have lost contact with the Pacific Division, so for now I will list their overall standing and projected draft number (No. 28 overall and No. 3, respectively). The months of October and November saw the team post poor records, but their was a nice spark in December. This month sits at 2-2, vital that Edmonton pulls some victories before the All-Star break. 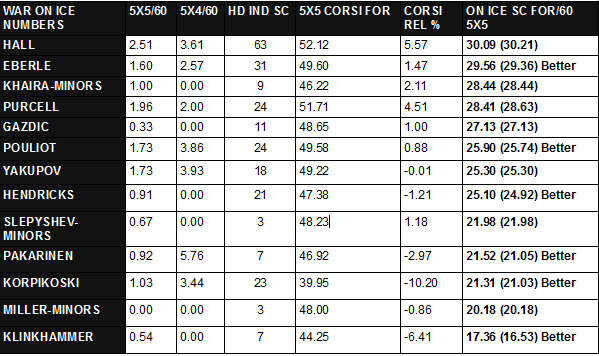 Not sure what can be said to any #Oilers fan who is surprised by the suspension to Hendricks. It was a done deal the moment he threw the hit

I think that is fair, the Oilers had to know there was a chance of at least one game since there was no penalty on the play. Three seems to be a little harsh, but that likely comes from the NHL wanting that kind of hit out of the game. I think the Panthers showed poor judgement in letting him play after that hit. I also think some are way over the top in their criticism of Matt Hendricks. He is an honest player, the hit was dangerous, he gets three games. It doesn’t change my opinion of Matt Hendricks.

I don’t know what the future brings, and do understand Nail Yakupov is a player of unique talents and challenges, but man I hope he hangs around for another decade. Good Canadian boy from Nizhnekamsk.

ONE LESS BELL TO ANSWER

There has been so much talk since the Florida game about lack of retribution and I still haven’t seen anyone talk about the connection between the Hall and Ekblad hits. Here is my take (and I was in the building).

Back in 2011, and I assume that would be Chiarelli’s template (allowing for the fact Edmonton possesses more natural talent), the Bruins employed the following physical players:

They had various other scoundrels and troublemakers but this is the most of it. To review, Edmonton has the McQuaid, the Thornton and the Campbell. They lack the Marchand, the Chara, the Horton and the Lucic. Expect changes (and Kassian’s call to the Oil). Seriously. One thing to keep in mind: Benoit Pouliot doesn’t fit any of the slots above, that could spell his doom (despite the fact that he is a perfectly good hockey player).

A busy, fun show with smart people—we try to do that every day! 10 this morning, TSN1260. Scheduled to appear: