In the last five Oilers games, Darnell Nurse has played 20:39, 21:30, 22:51, 18:59 and 25:37 for the Edmonton Oilers. Given veteran alternatives like Andrej Sekera and Mark Fayne, Oilers coach Todd McLellan prefers Darnell Nurse to play the most minutes. Proof: in the game against Arizona, Nurse played five more minutes than Andrej Sekera. NHL coaches don’t do that by accident—and that is a fascinating development. Is it possible to fast track development by feeding a rookie major minutes?

In G45 last season, Edmonton received a two-goal performance from Benoit Pouliot but the Lightning got two goals in the third period to win by one. I would be shocked if they win tonight. Seriously. If they win, Hall scored four or Talbot stops 70. The Sharks are in a zone.

I sorted this by even-strength time-on-ice, because it shows McLellan’s preferences in the largest game state. For me, the big quibble is over Fayne (he is No. 7 among regulars, I would have him top 4D) and the number of minutes Nurse is getting. How many rookies have averaged 19:23 a game at even strength since 2000?

Andrej Sekera is my defensive MVP to this point in the season, probably would have been Klefbom without the injury—and Brandon Davidson should get some votes. Nurse? His possession numbers and SCA/60 are improving since being taken off of the Sekera pairing, but those major minutes are a major curio for me. Is this a good idea?

Ouch! You would think a headman pass from one of these gents would have cashed, but no sir. Among the goals and assists here, 3-1-4 came at even strength. Edmonton’s defense may be allergic to the forward tape-to-tape pass. Seriously. One thing favoring Nurse? Shots. Leads defensemen in these 10 games with 21 shots.

Oilers have great depth at this position the moment Connor McDavid returns. One of the things we can probably talk about is roster makeup for next season. Of course there is a chance PC trades Nuge (I am doubtful), but if that happens you can bet a veteran C will be part of the patch at this position. Leon and McDavid hammered opponents in the first half when here and healthy.

After Leon’s exceptional play during the first portion of the year, this looks frightening. It is, in fact, terrific production for the (should be) rookie. RNH is getting his points, and I am encouraged that five of those assists have come at even strength. He needs that 5×5 number to climb toward 2.00. Letestu scored all three of his goals at even strength, that is impressive. 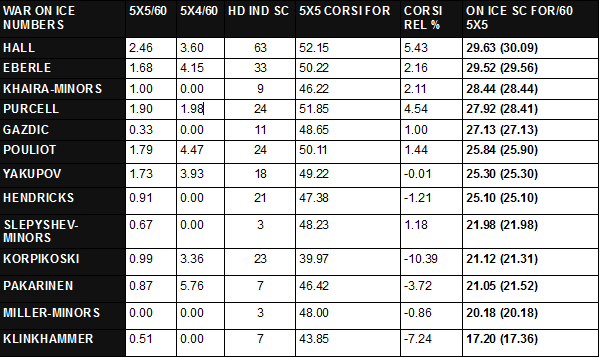 Taylor Hall’s numbers have been fire all year, but he did not play well in Chandler—expect a rebound game. No. 4 looked indifferent at times and angry at others on Tuesday, not a mature game from him. Jordan Eberle is coming on now, he and Pouliot are feeling it and Leon helped them find clean air in the desert on Tuesday. I wonder if we see them as a trio again tonight, I am hopeful.

Nail Yakupov may be back tonight, Edmonton will have to send someone down or IR a player. We are reaching a point now where decisions have to be made, and that could mean a trade. Based on the chart above, my candidates for demotion/IR are Rob Klinkhammer and Luke Gazdic.

You would like to see more secondary scoring (anyone past Purcell) but it is also true the club has injured men like Yak and McDavid—teams don’t have enough depth to overcome the loss of two No. 1 overall picks no matter the quality. I would bet Hall has a night here soon. 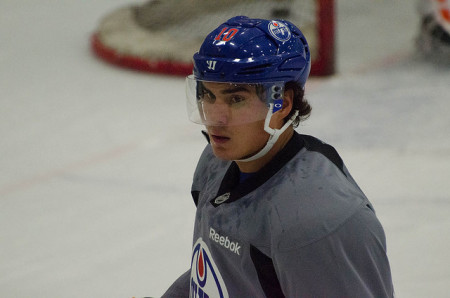 Kassian’s arrival and the imminent activation of Nail Yakupov give us new opportunities to guess the most effective lines. Todd McLellan does quite a bit of in-game shuffling, so I will be watching closely to see changes on the fly. Here’s my initial preference:

I prefer Pakarinen to Korpikoski but LK is being paid like an everyday player and he is on track for 12 goals—on this team, that is a massive amount for a player outside the top 6F.

I like the third line because it attempts to get Lander back in the land of the living, while also (hopefully) being able to keep the puck out of Edmonton’s net. When McDavid is back, I would not hesitate to put Nail back with McDavid—perhaps running lines like this:

Thoughts? It should be a fun February for Oilers fans, until Purcell is traded anyway.

In the last 10 games, the goalies have separated themselves in a big way:

Small sample size and all, but in the last 10 games Talbot is 3-4-1 with a shutout and has been a major story in pretty much every games he has played in. Suspect we hear some contract talks in the next while.

The Los Angeles Kings are in, the Edmonton Oilers are likely out, & that's about all which can be said for certain. pic.twitter.com/Vs0hETBvyY

A win tonight AND Saturday would get this party started, but we haven’t seen much evidence to suggest a two game winning streak is at hand. Talbot starting is encouraging, but the Sharks seem to have righted the ship—the goal differential for the two teams playing each other tonight tells a story. 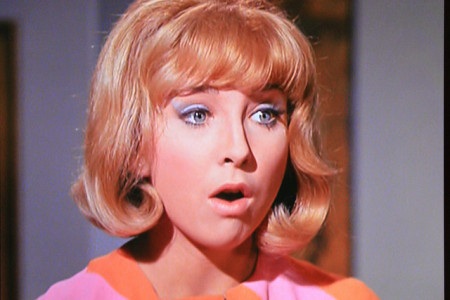 THICK AS A BRICK