On a day like this one, Oilers fans everywhere have an extreme sense of dread. Saturday. National television. Calgary Flames. The past informs the future, so we can expect misery and pestilence and  ruin. Maybe they will run a Robyn Regehr highlight package featuring, of course, Ales Hemsky. If ‘Saturday Night Oilers’ were a country song, there would be no survivors—not even Merle. When this thing turns, and it will (right?), I am going to do my Joe Thornton impersonation after every Saturday night Oilers win, in public or private. I may need bail money.

I think we are all just waiting for McDavid to return now—wouldn’t it be nice if he showed up tonight and scored three?—and one hopes the Oilers can get through January with around a point per game. A year ago in G46, they won in a shootout in Sunrise.

I have been monitoring the Corsi For 5×5/60 for three defenders since Nurse came off the Sekera pairing. Despite playing significant minutes, Nurse is in fact rising from his previous levels—indicating the Oilers pushed as far as they could, and then (correctly) identified when things got overwhelming: 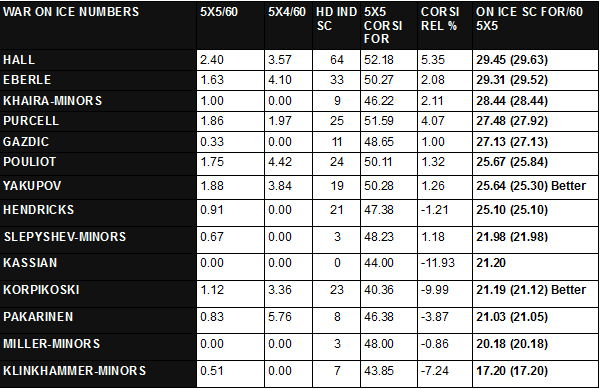 Lots of work to do, and remember he is aggressive at the trade deadline—his first one saw a major overhaul on defense. Let’s revisit that for a sec:

Chiarelli moved off Mara fairly quickly, wonder if we see any movement on his hires this early. I think we are far enough into the season to give some grades on his summer work:

I believe the Talbot, Sekera and Letestu moves were quality and did in fact address substantial need, your mileage may vary. After that, there are varying degrees of minor success and failure, with McDavid obviously a different chapter altogether. When you enter a summer with seven things to do, does getting three of them locked down represent success? We have all summer to discuss, maybe the Kassian addition and whatever is done at the deadline will skew the view. Right now? 70 percent. I like the deals mentioned, but the Reinhart and Gordon trades have major concerns attached and potentially long-term progress has been impeded. We can’t just ignore that aspect of his early Oilers record. If I added in the strange decisions around the Schultz buyout window the grade would be lower.

I don’t expect those lines to stay, but hope the Sekera-Fayne pairing lasts the evening. I saw the Flames on Thursday night, they are electric and Edmonton has two rookies, two slow guys on defense. It will be important to actually watch the game, the commentary will be pro-Flames no matter the score. I used to love Saturday night against Calgary and have reached the point where alternate plans are at the ready. A man can only take so much from his favorite team in one lifetime, and losing to the Flames on Saturday night brings out the worst in me. The dog has been warned, as have you. I begin the day in a mood most foul, for my own protection. Tabernac Saturday is before us. Go you Oilers, win this one for the fans and we won’t be pissed at you until at least Monday. Godspeed. 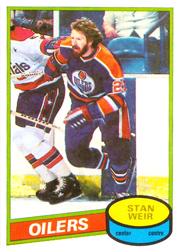