The Edmonton Oilers reach game 50 of the 2015-16 season short of a point-per-game and deep in the second division of the standings. They have figured some things out—Cam Talbot, Andrej Sekera, Brandon Davidson, Leon Driaisaitl look like keepers—but a steaming pile of question marks remain.

I guess Nashville was the roughest
But I know I’ve said the same about them all
We’ve received our education
In the cities of the nation, me and Paul

Those currently on IR are underlined. When you consider the amount of time Connor McDavid, Nail Yakupov, Oscar Klefbom, Justin Schultz, Benoit Pouliot and others have been out, that has to be a factor. How much? Don’t know. One thing I hope we can agree on? This is an issue, not an excuse. 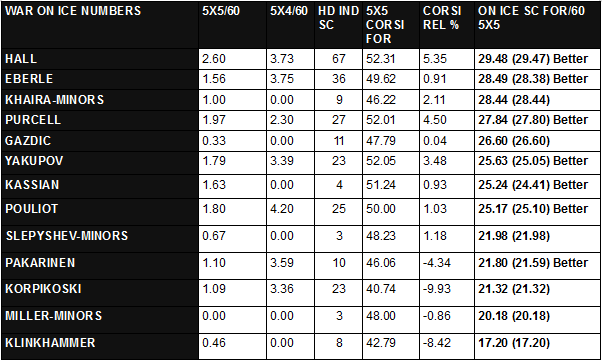 Peter Chiarelli is already moving on his RFA and UFA talents, and the Cam Talbot signing signaled the beginning of that portion of the roster framework. We all have our favorites (and least favorites!) and the market will tell us what has value. That said, here is my list of players who should be in play:

Good to see Linus Omark is still ??in the shootout. #Oilers https://t.co/SAezmDllGY

Linus Omark. I always liked the guy, others thought him a fool. The Oilers made the draft bet and he had some moments, but arrived in a season that featured fellow rookies Taylor Hall, Jordan Eberle and Magnus Paajarvi. I always hoped we would see him in the NHL again, suspect that ship has sailed. Glad to see he is having fun.

According to rumours, all 29 other teams can/will/should claim Joakim Andersson. #NHL

This is exactly how I read it. Everyone says it is a great idea—and Landon Ferraro took off like a bat out of hell when he left Detroit—but Andersson’s rep seems to be far greater than recent performance. Seems he is a bigger Anton Lander at this point, at 6.02, 211 and with good two-way ability some team may take him. Edmonton? Maybe. Lander does some things, can’t score. Andersson would seem to have similar issues. We wait.

WE’RE ON TO NASHVILLE