No matter how smart you are, a tangled cord can take forever. The Edmonton Oilers tangled that cord in about 2006 and it is now beyond a mess. Peter Chiarelli spoke to Bob McKenzie in the summer (I wrote two items, here and here) and I thought today—possibly on the verge of a trade—we could review some of the quotes and read the progress. Is that cord straightening out?

ON A HEAVY GAME AND HITTING

ABOUT MOVING THE SKILL OFF A SPECIFIC LINE

Todd McLellan likes his muckers, and doesn’t really spend his 4line for much of the game. So, one of the issues we have when trying to puzzle these pieces into the jigsaw of the future is where to put Nail, or  Pouliot, or whomever. I can say Hall—Leon—Purcell, Pouliot—McDavid—Yakupov, Kassian—Nuge—Eberle, and you can say ‘yes!’— but it doesn’t do one damn bit of good if the coach doesn’t see the value.

As it turned out, they sent both men down but they have played most of the schedule in the NHL. Interestingly, Draisaitl has been able to maintain a high level of play, while Darnell Nurse has faded—partly (at least) due to his monster minutes (21:05 a night). At this point in the season, Nurse probably needs to play third pairing and far fewer minutes if he is to remain an Oiler for the rest of the year.

Slepyshev had a helluva pre-season, and has played in 11 NHL games so far this season. He got hurt in Bakersfield, and with Bogdan Yakimov jumping to the KHL one wonders if the other Russian will stay the course. He showed flashes and looks like a good bet—the Oilers may have room for him depending on how the summer goes.

As it turned out, they had ‘two legitimate’ in Sekera and Klefbom, and Oscar played in only 30 games. The Oilers two-year bet on Nikita Nikitin is a complete swing and a miss, and Justin Schultz at this point appears to be have correctly labeled by management—and that is a fairly new development. Remember last spring when MacT named Schultz as one of the men he was comfortable moving forward with? Not so with the new management.

I think Chiarelli and McLellan probably have a good view of Schultz now, and it is telling that the club grabbed Adam Clendening from the waiver wire yesterday. I don’t know the teams who might value Schultz, but a good guess would be a strong defensive team that isn’t getting much from their blue line in terms of offense.

THIS MUCH SADNESS IS TOO MUCH SORROW

This is all even-strength information, I like to look at it because it is the big part of the game. Improvement in the offensive areas, and—despite climbing only one spot overall—a nice spike in even-strength save percentage year over year.

DONNER, PARTY OF 46, YEAR OVER YEAR

Just one month in the four have been .500, and the galling thing is that January could have been better with a little better attention to detail in Florida. McDavid, Davidson and (hopefully) Klefbom coming back should help, and if the Oilers give larger minutes to men like Sekera and Davidson and less playing time to Darnell Nurse and Justin Schultz, maybe they can have another .500 month. There are 32 games left, could they produce 32 points? That would mean 75 points for the season and represent a significant season-over-season improvement—especially when factoring in all of the injuries.

Boston may make sense for a feature role, although Colin Miller (36, 3-12-15) seems to be doing okay as an NHL rookie. Would Justin Schultz look better playing alongside Zdeno Chara or Dennis Seidenberg? Yes. Yes, he would.

What would Boston need to give? Peter Chiarelli would know their system and also know he wasn’t going to receive an A prospect in return (no chance Schultz fetches an actual NHL player imo). Here is a list of possibles: 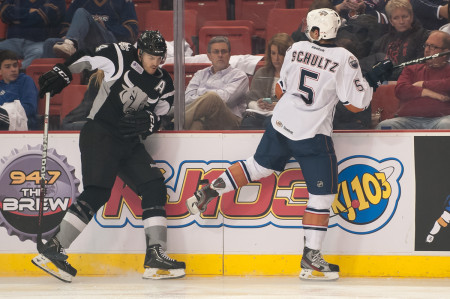 When he arrived, and in the early days (OKC and here), you could see the promise of Justin Schultz. With the puck on his stick, elite talent around him and strong defensive support (Martin Marincin was his Barons partner) Schultz was free to wheel as a fourth forward, or rover.

The problem for Schultz is that he never got better, he gained one year’s experience four times, instead of four year’s experience. Years ago, I asked John Short about Tom Poti, who was being booed unmercifully by Edmonton fans at the time.

That is an impossible scenario. When Schultz was paired with Nick Schultz as a rookie, his possession number at 5×5 (44 percent) trailed the veteran when NS played without. The next year, he was 42.7 in possession with Andrew Ference, who didn’t do well with or without Schultz. In year three, Dallas Eakins unlocked him by placing rookie Oscar Klefbom alongside and giving the pair major offensive opportunities—and in 2014-15 Schultz hit 50.1 percent Corsi for 5×5.

This season, with Peter Chiarelli and Todd McLellan planning to use him top 4D (as per above), he is 48.2 percent with (mostly) rookie Darnell Nurse.

I don’t hate Justin Schultz, but do dislike the number of at-bats given and time invested in him. The problem is you develop a past, and in the time Justin Schultz has been an Oiler, a lot of defensmen and a few coaches and managers have been sent away.

We will see, but it looks like the new management took 50 games to conclude there is no key available to unlock Justin Schultz as an effective NHL defensemen. About a month ago, I received an email arguing that the Oilers needed to be patient, that Schultz hasn’t reached 300 NHL games yet, and that he would flourish elsewhere.

My counter? Justin Schultz will turn 26 in the summer, remains a flawed player and we are STILL talking about finding a partner to help him. I would think that, at 26, it might be time to begin delivering help to the 20-year-old rookie on the other side of the ice—not vice versa.

I hope Justin Schultz has a long and productive career in Boston, but am prepared to argue vigorously that we have seen enough to know we all need a second opinion.

A busy and fun show today, TSN1260 beginning at 10 this morning. Scheduled to appear: