The Edmonton Oilers reach G55 for the season in familiar territory: Back of the line, waiting for the lottery balls. Although the playoffs remain a distant bell, there are jobs to play for and a strong effort might get them a table in the second row on draft day. I think it is important for the Oilers to push—they did last season when other teams were selling off their best goalies—but at this point I think we are probably looking at a top-five selection at the 2015 draft. As the daylight begins to stay longer, this blog will begin the transition toward the draft and summer.

A year ago, Edmonton lost by a goal to the NY Islanders, Colin McDonald playing one of the best games of his NHL career. Todd Nelson’s crew went 5-6-1 in this month, Todd McLellan’s group is 2-2-0 with a schedule that could deliver any score you could imagine. The Edmonton Oilers, at this point, are like a box of chocolates—you never know what you are going to get. 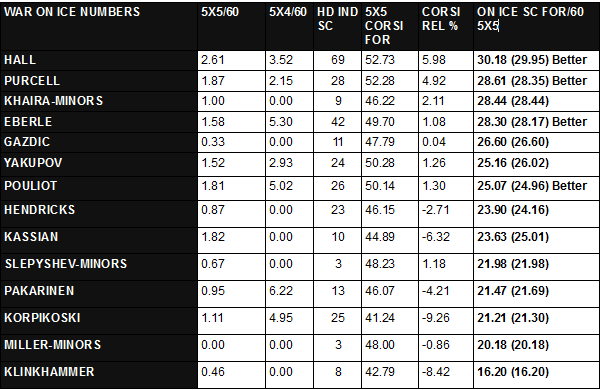 One big trade (Hamonic) and free-agent pickup (Demers) and asking two rookies (Brossoit and Slepyshev) to join the chorus. The Hall and McDavid clusters are intact (well, the McDavid cluster takes another draft day hit) and you have two solid additions on defense. This assumes things like Mark Fayne is traded and they don’t re-sign Lennart Petrell.

The RW depth chart looks a little thin, but if Yakupov struggles, Todd McLellan can slide Leon over or he can move Zack Kassian up. This is a pretty sweet forward group, I would suggest moving out Korpikoski but suspect they are stuck. The good thing? Should mean Pakarinen or another swoops in and grabs that job before season’s end.

Hearing lots of Dion Phaneuf trade chatter. Starting to think he could actually be dealt before the deadline.

I cannot imagine the Oilers are in on this, Phaneuf is having a good year but is not getting the toughest assignments. His contract remains an albatross.

I love the McKenzie lists, these are extreme value. The final 30 will be different—Euros come flying in like hell won’t have it—but here are some interesting tidbits I saw from the list: