The Edmonton Oilers were asleep at the wheel to begin their home stand, but woke up just in time to watch Connor McDavid announce his presence with authority. Tonight, they meet the Winnipeg Jets—a team they can reach in the standings with a double you in regulation.

Oilers got hammered 7-2 by Ottawa a year ago. I no longer look forward to HNIC games involving the Oilers. They have been horrible for a long time on the national game, and the coverage (I find) does not inform the game. I will watch with the sound down and assume the worst result. Along with a healthy roster and the playoffs, it would be nice to look forward to Saturday broadcasts next season. 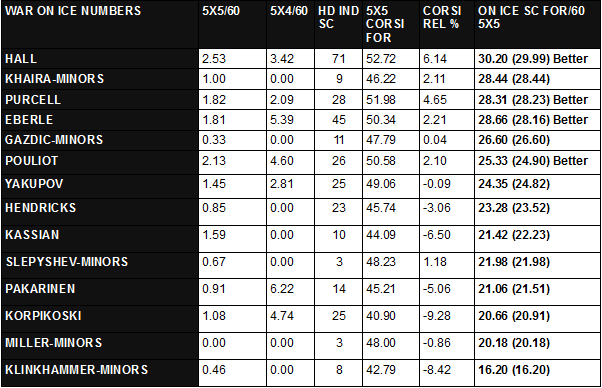 I am still chuckling over this lineup, suspect Todd McLellan is sending a message. After all, we merely witnessed that first period against Toronto, McLellan had to endure it from the coaching perspective. It has to be wildly disappointing for a successful coach to see that much suck from a group he has been leading for almost one complete season. We all know this group of lines is unlikely to last (tonight, they will shuffle the second and third lines, pretty sure), but as a wake up call, this is a pretty good shock.

I will have an item up on ON later today about the Oilers at the deadline, but wanted to quote Pierre Lebrun and his take on the two primary trade targets from the Oil:

Purcell’s dollars will go (imo) to a bigger winger from the Lucic tree, suspect Edmonton will run that player with McDavid, Hall, Draisaitl and two of Nuge/Eberle/Pouliot next year. I hope PC has seen enough of what this team looks like without the Nuge to pull him back from the next Seth Jones offer, but we should have at least some worry about how much the new GM values RNH.

Don’t underestimate the power of the Jeff Petry story here. Edmonton has to be known in the industry as the place where careers go to die, but Petry’s success in Montreal may attract a team to the idea of buying low (it will not cost much) on 19. Gregg Krupa of The Detroit News mentions Schultz in regard to the Red Wings, that would be a fantastic landing spot for him.

One thing I want to discuss over the next week or so is Mark Fayne. If an NHL pro scout has been watching this team, and for whatever reason is making recommendations about possible defensive acquisitions from Edmonton, it has to be Mark Fayne. He is a better defender than either Schultz or Gryba, and is healthy—plus there is a chance Edmonton retains salary during the final two years of the deal. I haven’t seen a lot of chatter on it, will have something up on ON later and think it is worth chatting about as we edge nearer the deadline.

FINDING A SOLUTION FOR THE POWER PLAY PROBLEM