The Edmonton Oilers dropped another game in their annual race to the lottery, and are now stone alone in last place. Over the last several years, other teams have leased the space, but Edmonton owns it outright on aggregate. It is not a title to be proud of, but it does come with some benefits.

February is now approaching the worst month of the McLellan era, we could see the club reach eight losses next week before the deadline. The goal differential—once something of a beacon for the current group—is now in free fall and it is probably smarter to bet we see -50 over getting to -25. This team is not good, and Oscar Klefbom is not Bobby Orr, Ryan Nugent-Hopkins is not Bryan Trottier.

"(Our record) is disappointing for all of us, for the whole organization. It's not where we thought we would be." Coach McLellan

Back in the fall, I mentioned that not buying out Nikita Nikitin in the Justin Schultz arbitration window was a mistake. It telegraphed what we now know to be true: Peter Chiarelli believed he had enough quality and depth at the position. This speaks to competence. When I bring this up, the response from posters is often this: WHY buy out Nikitin when there was no free agent available. However, if Chiarelli had enjoyed more cap freedom, he may have been able to find solutions during the year. This of course also applies to the lack of transaction after the Nuge injury. Todd McLellan is the coach, he takes the heat. However, on a morning where the Oilers lost while also asking Nikita Nikitin to win the day, I would like to point out this roster lacked balance from the beginning. We can torch management for wasting a year of McDavid, fair play to you. We cannot pretend Todd McLellan entered the season with 23-men who represented quality, depth and balance. No sir.

Korpikoski has been a poor fit from the start, doubt Peter Chiarelli can get something done but that would be a fantastic result (assuming he doesn’t bring back another stray cat with two more years on his deal). Here is my trade deadline list: 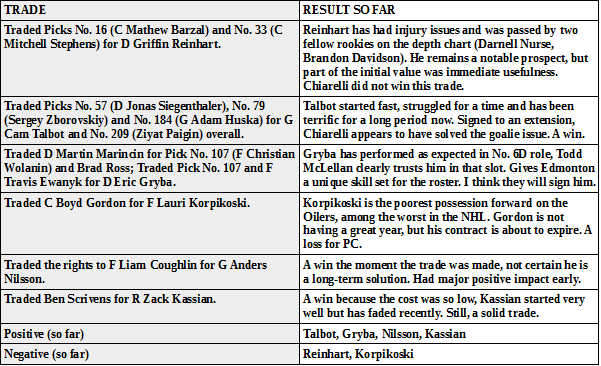 Peter Chiarelli’s first trade deadline was active and definitely changed the look of the team. Here is a brief look at what he did:

I think there are a few things we can learn from that deadline. First, Chiarelli isn’t afraid to trade bigger pieces at the deadline, and at least that year he wanted players in return (perhaps giving us an indication about this week to come). Second, he gave value in each case, but also changed the look of his team—and in doing things like adding Kobasew and subtracting Boyes, created and then covered up spots in the roster. So, when I look at the RW position as an example, perhaps he trades away a piece, leaving a hole that is replaced quickly by another deal.

I followed Chiarelli closely back then, the Bruins stripped their team down before the lockout and had a lot of work to do. Looking back, some of these trades were forced by contracts and free agency, and the actual return (when taking all three deals as a whole) involved re-setting the cap and filling holes with better contracts. Perhaps we will see similar from PC at the deadline.

I can tell you he was effective as GM in Boston, and even though I thought he should have bought out Nikitin last offseason, he may have had a plan that will come to fruition this deadline (or summer). PC has not impressed as Oilers GM in year one, no one can argue it. One thing he has done? Put himself in an interesting position for the coming summer:

For me, the last item is optional and comes at the price of Benoit Pouliot. I wouldn’t make that deal, but am fairly certain Chiarelli would do it with extreme prejudice.

WHERE THE OLD WORLD SHADOWS HANG HEAVY IN THE AIR