In the final days of the Justin Schultz era, we are talking about what went wrong. I think we all agree 19 was thrust into the deep end—too much minutes—too soon, and he never did develop because of it. Schultz was a workhorse rookie, but the Oilers learned from it:

In putting Schultz (and now Nurse) into a major role out of the box, it forces development (or regression). Klefbom is a different case, as Craig MacTavish (correctly) kept him in the minors for most of his 20-year old season (Oscar was 21 in 2014-15).

The one thing fans had to hold on to this season was the Goddams, but the Oilers have been flagging badly in that area in the last few weeks. Last year’s Oilers lost a 2-1 game to the Anaheim Ducks, Iiro Pakarinen had five shots in that game. 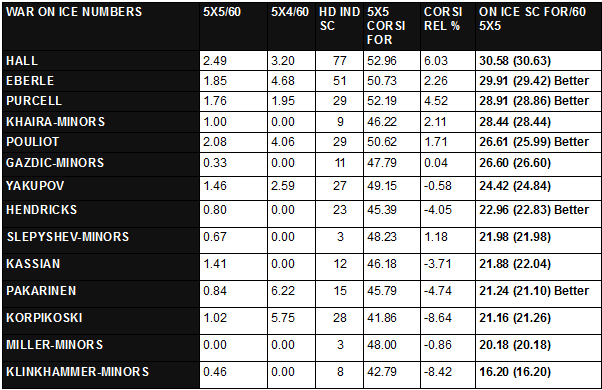 The greatest rock and roll band ever is the Rolling Stones, and they were at their peak from 1968 (Beggar’s Banquet) through Goats Head Soup in 1973 (Jimmy Miller was in on all of them). The key to the golden age of the Stones is a guy named Mick Taylor who I won’t bore you with, but he was brilliant and his touch is all over their best music.

Anyway, the Stones were rolling through so much great music in the early 1970s it seemed it would never end. The men who recorded those albums had a special sound, it is glorious. After Taylor left, it was pretty obvious (by Black & Blue for sure) something was missing. They were still the Stones, but no longer THE Stones.

Along about 1981, a Stones song hit my radio and blew me away. It was called ‘Waiting on a Friend’ and it was the best song they had put out in a long damned time. I loved it, from the simple guitar line launch to the fat saxophone that sends the song away. Beautiful. The song had its origins with the Mick Taylor Stones back in the Goat’s Head Soup era. The band loved the song, but couldn’t find the lyrics, so they could not unlock the song until years later. I never knew that (seriously) until recently, but I always kind of knew it. You know? It was too good to be Ron Wood Stones, had to be from the mainline.

I think Nail Yakupov is ‘Waiting on a Friend’ in that he and the Oilers cannot find the words. I don’t think Nail’s story ends with him playing 15 seasons in the KHL, but rather in another NHL city where he finds success. If the trade comes this week, I think we are all ready for it, probably better than waiting for summer.

I don’t go on Reddit (my daughter has been there, she likes it, so maybe it is for the young folks?) but Friedman is a helluva get for the company (is it a company? or a band of gypsies?). Anyway, the line about Edmonton having one major move? I will guess Nuge to somewhere for a good, expensive defenseman.

Who might be coming to Edmonton, for Nuge or another? I will guess Sami Vatanen (ANA), Dougie Hamilton (CGY), Brent Seabrook (CHI), Travis Hamonic (NYI), Jacob Trouba (WPG—would have to be a bigger, multi-player deal). I doubt it happens, but if Friedman is saying it, I trust there is something out there.

Frank Seravalli of TSN set trade values for various rentals, has Purcell (2nd) and Schultz (3rd) covered in this article. Those assessments match mine, here is my list (I put Gryba back on the list, but he is injured and his being dealt seems doubtful):

The Oesterle recall further empties the bench for the Oilers, what is left? I always find the best way to track these minor league chaps is to post what they have been doing since January 1. Here is the list:

Who would I like to see? Jujhar Khaira looks like he could be a useful role player, I would like Todd McLellan to see Tyler Pitlick before they cut him loose, David Musil needs a look before the waiver issue in the fall. I am curious about Anton Slepyshev, so wouldn’t mind seeing him here for the final 20 games. As mentioned above, if Reinhart and Nurse trade places, that is probably a positive long term for the organization.

Bruce Garrioch has a column up about Ottawa possibly trading Shane Prince and Patrick Wiercioch, plus Tampa Bay shopping Erik Condra. I like all three at some level, but Condra ($1.25M, two years left) is an excellent penalty killer and possession player. Article is here.

As the deadline nears, more trade talk on the Lowdown, 10 this morning on TSN1260. Scheduled to appear: