HEY 19, NO WE CAN’T DANCE TOGETHER

The Edmonton Oilers lost another game last night, this time 4-1 to the Ottawa Senators. Coach Todd McLellan did not enjoy the performance, and let fire with some righteous verbal in the post-game avail. If we made a list of coaches who lost their employment and part of their reputation while drawing a cheque from Edmonton since 2012, you would run out of fingers and need to start in on the toes.

"Pretty disappointing night for him as an individual and it affected the team." – Oilers coach Todd Mclellan on minus 3 Justin Schultz

FANNY BE TENDER, YEAR OVER YEAR

Todd McLellan was extremely frustrated (some quotes below, but the entire post-game is golden), but today I want to take a quick trip into the past—in order to inform the future. We are over 60 games into the NHL season and I think we can reach a major conclusion: Todd McLellan is going to play the style he prefers, and by next season we should see a team that represents his style. The Oilers, as they are currently compiled, are not an ideal McLellan team—and he hasn’t altered his ‘place and chase’ style—to suit this team’s skills—as much as we might have hoped in year one. I think this means an airlift of role players prepared to place and chase, forecheck, cover and battle—at the cost of skill.

"There were some (players) who should be embarrassed when they leave here." – Oilers coach Todd McLellan, after a 4-1 loss to the Senators

What would that look like? Last summer, long before the season, I spoke to Derek from the fantastic blog Fear the Fin. He was very informative about style of play—and I think the quote is even more important now that we have seen McLellan as coach for 60 games:

I think we (and McLellan) have reached the point where it is fairly obvious that some of his current players are unable to adapt. McLellan’s comments last night came out of frustration, but if he and Peter Chiarelli are on the same page, that frustration will find its way to the players soon, in the way of new addresses. I think we are going to see several players who fit the style described above added in the next several months. Along with the heavy comments from Chiarelli, the die is cast.

If I may pause a moment longer, a lot of McLellan’s frustration could have been predicted based on the quotes from last spring:

It’s been years we’ve been here. How many coaches will it take? How many GMs are going to sentence their head coach to this? If you are an NHL coach, and your GM is thinking about trading for Justin Schultz, what does that tell you about how your GM feels about you?

The line above that I have underlined should read like this: His skill set is normally associated with a lot of assets, like puck skills, passing, skating. Despite being a player who has skills similar to successful puck movers, his lack of attention to detail and incredible lack of urgency often mean inertia in the most important moments of a game.

The lingering memory of the Justin Schultz era—for me—is the list of successful coaches he brought to their knees. In a way, it is damned impressive. In another, it is galling to the highest power. They sent Jeff Petry away, you know, partly because of their belief in Justin Schultz. In life, there are hits, and there are misses. Several days travel after ‘misses’ comes the guy who decided to flush Petry and retain Schultz. The mind literally boggles.

"The spirit of the team isn't where it needs to be… It's got to get better, or we've got to make huge, huge changes." McLellan cont'd

This is the thinking of a coach about to go on the road, where he knows his 23 will be wearing their collective ass for a hat. 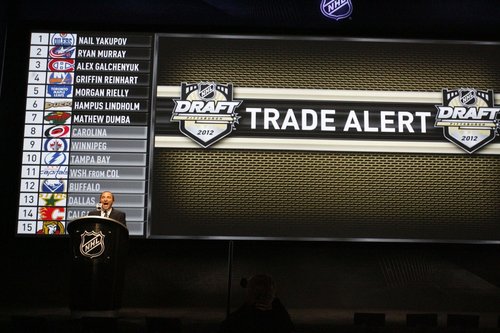 The fans are booing Schultz now, his confidence is low. We are in full death rattle in regard to Schultz’s time as an Oiler, best to send him away—today. I hate watching home players get traded, and from Coffey to Poti to now, it is always the skilled defensemen. We love our offense in this city, but Oilers fans in my section (thanks to WG for the tickets, best seats in the damned house) were more impressed by Jason Smith last night. That’s Oilers fans in a nutshell, right there.

In the short term, the Oilers pulling the chute (they did it on the road trip, but it came home to roost) is an annual item, with only Todd McLellan’s being new making this an issue. I am glad he spoke up, because the Peter Chiarelli avail earlier in the day seemed too calm for the season that was just lost. Among the quotes last night was a kid who was 19 saying it might be better to go on the road, and that is the main issue as far as I am concerned.

One of the major problems with this organization has been constant change. I do not think Todd McLellan has performed perfectly this season, but do believe he is vitally important to the process we can safely call crawling from the wreckage. I doubt we will agree on all of the names heading out, nor those heading in (lots of chatter that two defensemen are needed this summer, but the Oilers haven’t had four men on the blue you can count on opening night since 2006).

Heading out will be names like Justin Schultz, Teddy Purcell, maybe Matt Hendricks. Coming in? We wait, but the general idea is Hamonics and Boyles and Lucicis. If not those exact names, then similar in style and intent.

A fluid show, beginning with Bruce McCurdy at the Cult of Hockey and Sean Bissell, Campus Director of Hockey Operations for Donnan Hockey. Hour two will have one guest to talk Oilers and one to talk Habs, waiting to confirm. Stay tuned! 10-1260 text, @Lowetide twitter.

THE THIRD ROUND (2016 UPDATE)
STANDING ON THE SHORELINE