The Edmonton Oilers have had a busy week: Awful home game, GM pulling the chute, coach doing a scene from Network, and with the recall of Jujhar Khaira last night, the swallows are ready to return to Capistrano.

I DON’T WANT TO SET THE WORLD ON FIRE, YEAR OVER YEAR

The goddams are crashing as the Oilers do their annual fire drill, basically the ‘six-inch valley through the middle of my skull’ portion of the Springsteen songbook. No Thunder Road, no highway to freedom, no last chance power drive. At least one of the Oilers who got on the plane to LA, is likely to go out for a ride and never come back. Question: Will this Oilers team beat Dallas Eakins 2013-14 club in points? It could be close. Oilers won a year ago, 2-1 over the Wild. Last year’s team will climb within four points of this bunch with a win tonight.

McKenzie: Nail Yakupov's "name has been out there much, much more lately than it has been in the past." #Oilers

This hasn’t been in the news much at all, so much, much more might not be warp speed, but we will see. I assume the Oilers kicked the tires on Jonathan Drouin, and maybe Yak was part of that conversation. After that? Playoff teams looking for goals may include Anaheim, Carolina, Detroit, Florida, Los Angeles, Pittsburgh, St. Louis. Also, Oakland.

LeBrun: #Oilers' Teddy Purcell could be on the radar for the #LAKings. https://t.co/1IHBJbyOzT

Teddy Purcell seems a good fit with most teams, certainly the eastern clubs where speed isn’t quite as important (fast trains in the west). I think Purcell is both the most likely to be dealt and the most likely to get premium value. The question I have? Does Edmonton get a pick, or an AHL role player, or a prospect out of the CHL? They can use all three.

Edmonton trades the rights of Philip Larsen to Vancouver for a 5th round pick in 2017. Larsen is in the KHL. #TradeCentre

It can turn into a fourth-round selection if Larsen is productive (Bob McKenzie had that portion of the deal, he used the phrase ‘specified production thresholds’). It is a fascinating deal, one that the Canucks may win if Larsen can deliver enough offense to outrun what we perceive to be his negatives without the puck. From an Oilers point of view, this is an asset acquired for a player they were unlikely to employ in the future. Fun times.

I also think the Oilers would rather get back a young player or prospect rather than a pick for Schultz. A few teams have shown interest

I have written at length about this very subject leading up to the deadline, and have it covered in many areas:

The AHL looks are here:

The NHL look is here:

Part one of the hinterlands is here

There are 120 or so names on those lists, and I am confident none of them are heading to Edmonton. Still, it was a fun trip, hope you enjoyed it. IF by chance the Oilers do acquire one of the names, expect several weeks of ridiculous posts informing you over and over again. Al Gore made me do it!

The Oilers would be interested in Beaulieu. McGuire just said NB should be untouchable. 3C Eller what Oil need too. https://t.co/V9FGoDRYpc

I like Beaulieau and Eller, but the Nuge has far more value than this implies. One of the really heartening things to come out of this current dive? The Nuge’s value is obvious. I am not certain Peter Chiarelli was unaware of that, but if he is watching the games now then point made. 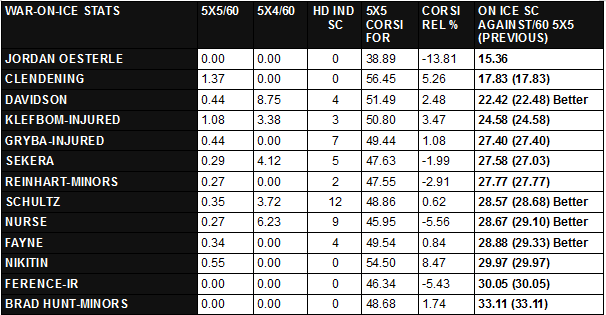 In my mind, anything lower than 25.00/60 SC against is a good number, meaning Brandon Davidson deserves his own planet and Oscar Klefbom is bona fide. Those two men should be front and center when we talk about next year’s Oilers blue—ideally manning the lefty side of the second and third pairings. Not a chance in hell that happens, but dare to dream.

If you are trying to create a playoff defense, who do you add to those two (Klefbom, Davidson) and Andrej Sekera? If you aren’t including Mark Fayne, then a way to dump him has to be devised and that may take an extra asset—Oilers don’t have a full cupboard of prospects and emerging role players.

I don’t think the Oilers get both of those players, and wonder if they even try. Where are the Oilers on Darnell Nurse? I think he is in that photo, folks.

I know most who pop in and post would like to see two additions (me too!), but the Oilers seem pretty devoted to Nurse and Klefbom. If a second is added, my guess is that Brandon Davidson hits the exit.

Connor McDavid’s line is crazy, he should win the Calder but may run out of time. Leon Draisaitl is slowly fading, but those numbers—over much of the season—are outstanding. Ryan Nugent-Hopkins was getting dragged routinely in the comments section of this blog before he was injured, I hope those who want to see him gone consider life without the Nuge. Not. good. Mark Letestu is not delivering on the contract, and there are two more years to come—that is not going to be a fun deal to unload, and may lead to trading Matt Hendricks (in an effort to get costs under control for the 4line). Anton Lander is probably a two-year stint in the SHL away from his next NHL chance, hope I am wrong. 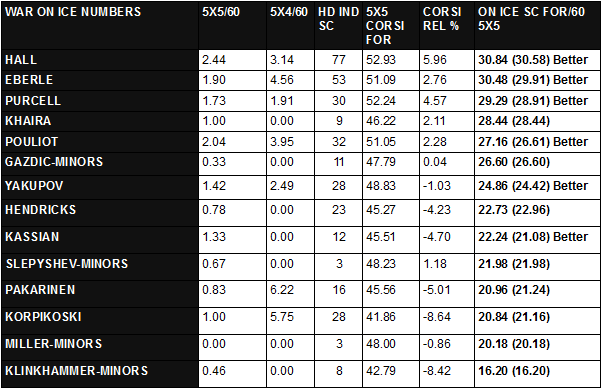 Taylor Hall and Jordan Eberle are posting strong numbers, 4 is struggling and 14 is surging, when it all comes down we should see quality totals. Benoit Pouliot and Teddy Purcell really are a solid second set of wingers, there is good work in those numbers. If we took all the names away and just looked at the numbers, the next man is up Nail Yakupov. I don’t see it any other way, your mileage may vary. I hope a smart teams gets him.

We first talked about Hunt back in June 2015 (here) and that was before he exploded this season. As of this writing, Hunt is 61, 49-50-99 with the Medicine Hat Tigers and is a terrific prospect.

Before someone asks, Paigin is under contract for one more season with HC Sochi, imagine he'll be ready to compete for NHL time in 17-18.

The best scouting report I have read on Paigin is from our own Swedish Poster:

Since 1979, Edmonton has chosen 27 Russian men out of  358 total selections (7.5%), but they didn’t start the process until 1987 and this century has seen 13 picks (major uptick). Since Nail Yakupov was taken No. 1 overall in 2012, Edmonton is averaging over one Russian per draft, and that’s good news since the NHL has decided to undervalue them in recent years. Paigin seems like a nice get, but we are early days and have to remember the five year rule.

As we expected, the trade (and I do believe Edmonton will be in there swinging. The two big gets for Chiarelli this summer would be Hamonic and Lucic—you should be prepared for 6×6 on Lucic and that isn’t something you can blame on MacT, that will be a Chiarelli move) will go down in summer, if at all. Can you take another overpay to the Islanders during the Friday draft broadcast?

YOU BETTER BE RIGHT