I don’t know about you, but for me trade deadline day was mostly about waiting for the Nail Yakupov trade. Nail to Montreal for Eller or Beaulieau, Nail to Columbus for some tortured soul. Peter Chiarelli kept his powder dry, and at the very least we have a few more weeks to watch him, and Edmonton can see his value increase. Or, and here is a crazy idea, maybe they unlock him with the special Connor McDavid key.

Oilers of a year ago lost 5-2 in G67 to Detroit. A nice recovery since that terrible Ottawa game at home (I was there, they were not. good.). Last night did give us more than one thing to celebrate, but this is probably my favorite:

Calgary has two games in hand, they could drive by Edmonton this weekend and never look back. That said, Edmonton does look to be better since the deadline. You can credit the new hires, you can credit Peter Chiarelli for dumping Justin Schultz, or you can credit Todd McLellan for not playing as many kids (Pardy and Cracknell are basically replacing Oesterle and Khaira—that is more experience). Either way, the Oilers have passed last year’s win total and are closing in on the point total of 2014-15. Small victories are big steps, and north is a direction.

Bogdan Yakimov is back! We just talked about this, but the Oilers really don’t have much bubbling under so every prospect counts. Among forwards, I would suggest Jujhar Khaira, Anton Slepyshev and Yakimov are the only prospects currently in Bakersfield who might play as many as 100 NHL games. I am not suggesting one or all will do it, just that Edmonton doesn’t have a player worth discussing in that light beyond those three. That is extremely poor. Yakimov’s immediate future might involve a callup, as he may not be eligible for the playoffs in Bakersfield.

Unless there's some weird loophole, Yakimov wasn't on the Bako roster at the trade deadline, which should rule him ineligible. #Oilers #AHL

I am not sure on this, but Rodgers has a good handle on these things. While I am at it, want to pass along a nifty item from Neal Livingston of Tend the Farm that pertains to Laurent Brossoit and Brandon Davidson. And since I think of those two in conjunction with Rob Ferguson (he has the photo in Neal’s piece) and Patricia Teter, you can follow the ECHL race via her fabulous Artful Puck blog. 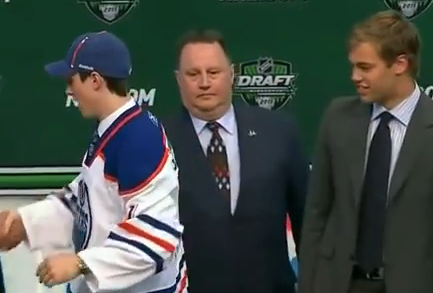 THE HEART OF THE ORDER

NHL teams, the successful ones, are built up the middle with strong two-way players. Edmonton had this during their prime in the 1980s and again in the 2006 spring window. How close are they now? Well, I think the club is going to be very strong at center (McDavid, Leon, Nuge) and am encouraged by recent words from Peter Chiarelli about 93. Although he wasn’t named to the North American team for the World Cup of Hockey, one suspects he will be at some point.

Here’s the deal with Nuge. If he was offered for Seth Jones and the trade was turned down (there was a lot of smoke) that suggests to me that a smart, veteran GM would pull Nuge back from trade talks. There is zero use in dealing RNH at 70 percent on the dollar. If at some point there is a substantial offer, and McDavid-Leon can handle the heavy lifting, it will be something to consider. We are not close to that day.

The rest of the group needs help and I do think we are going to see a big name traded for a defenseman this summer. It could be a draft pick (although the Oilers winning could dash those hopes—there is a chance they could climb to No. 22 overall), but more likely an actual NHL forward. If we are building a successful team, and understanding the template for success (one rock goalie, four actual two-way defensemen, three centers true, four wingers who can cash), Edmonton actually gathered some pieces this year:

Peter Chiarelli added two pieces (Talbot, Sekera), plus one each from the hockey Gods (McDavid), Brandon Davidson (Brandon Davidson) and possibly Todd McLellan (Nail Yakupov unlocked). So, by my count, that means Peter Chiarelli needs to add two defensemen this summer, and they could trade out a winger and add Patrik Laine at the draft (good lord willing and the creek don’t rise). Is Peter Chiarelli improving the heart of the order? Are you comfortable with Talbot? Do you worry about Oscar? For me, I would like a better two-way player on RW to go with one of Eberle or Yakupov, and am curious about Davidson and how much competition he will provide for the Hamonic—Demers additions.

Thoughts? I figure the pick is part of the Hamonic deal, and Demers comes for just money. I also figure the Oilers won’t have enough to buy out Korpikoski, but that Khaira might force him to the pressbox during the year.