The Edmonton Oilers welcome back Ryan Nugent-Hopkins tonight, and it offers us all kinds of opportunities to speculate. Possible lines, possible trades, possible destinations—some of these subjects are more palatable than others.

Oilers lost in a shootout to the Columbus Blue Jackets one year ago, and we were talking about a Nail spike and the 2015 draft. 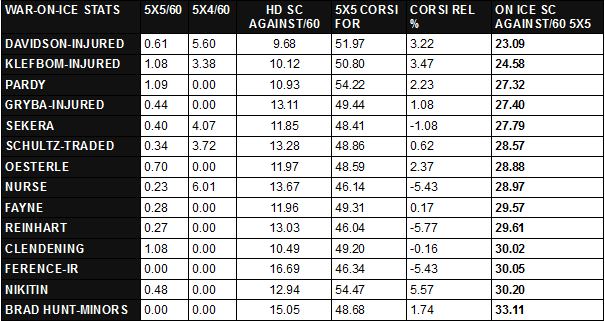 Dellow: There's a lot to be said for doing work publicly, and having that work put through the grinder by smart people who read it. #SSAC16

Every once in awhile, someone (like G Money recently) will post information here, and if it has value people will start drilling down and asking questions, making suggestions. That’s exactly how it happened on blogs like IOF and mc79hockey, and should continue with Sunil, G, Darcy and the other men and women who post on the web. I agree with what Dellow said in the Cullen quote, that is the test. If you can convince the really smart people who frequent the various blogs and online communities (twitter is becoming a very strong option), then it probably has extreme value. I recommend starting your own blog and developing a community that way, and of course if you email me I promise to listen (have a meeting on Monday with someone who has some ideas). The general idea is to get good information out there, and over the years this blog has helped a little. So, if you have an idea or have produced something of note, please share with the class.

I am unsure the Condors make the playoffs, so this might be the home stretch for prospects to show well. With all of the trades and recalls, there is often a re-set this time of year. It is reflected in the numbers below: offense in the past five games (including last night).

Young and hopefully emerging prospects in italics, it is good to see Slepyshev, Khaira and Winquist at the top of recent scoring. The Oilers trading of Andrew Miller, combined with what looks like lesser roles for some of the veterans, is allowing the kids to perform—and they are posting offense. The playoffs seem far away, though.

A solid article on the subject by Rob Tychkowski and definitely worth a read. I find the entire thing very frustrating, partly because there is at least a chance Peter Chiarelli will arrive in summer without seeing RNH in his best light. Something similar may have happened last summer, as I believe there was a non-zero chance Oilers brass blamed Taylor Hall (and his injury-riddled season) for the team’s failure. Small sample sizes makes asses of all of us, in hockey or in life. I hope Chiarelli knows what he is doing in regard to the Nuge.

I’LL HAVE A SHOT, AND THEN ANOTHER

Last year’s shot differential was -1.7, this year (so far) it is -2.5 and some of that is probably injury. Fair? I have zero idea how to quantify it, so will leave it here. McLellan’s teams in San Jose seemed to have a lot of success in getting shots to the net, perhaps we will see a spike in hear two. While I am here, thought it might be an idea to look at 5×5:

At 5×5, the Oilers finished at -2.4/60 5×5 in shot differential, and this season that number is -1.8/60. Slight improvement, but I think we can all agree more was anticipated and should be delivered. How much of that is because of injury? The only way to measure these things is with the information available. I would suggest this team will be better next season even with better health, but it is also true the team itself will make improvements to help these numbers.

WHERE TO PLAY THE NUGE?

I have a few ideas about it, looking forward to seeing how Todd McLellan handles him this evening (if he plays). There are several options, including the Hall—Nuge—Eberle throwback look and Hall—Nuge—Draisaitl, an effective trio earlier in the year. If McLellan runs his top two lines exactly as he did in the Minnesota game, the top 9F tonight might look like this:

I strongly dislike that outcome, for two reasons. Edmonton doesn’t have enough wingers for three centers, and, incredibly, this configuration gets Yakupov to the fourth line! I suspect we will see a lot of shuffling tonight and through the end of the season. Perhaps Nuge and McDavid will even see each other on a line before G82.

NUGE ON THE RUN