The Edmonton Oilers won last night despite giving up 40 shots to a Vancouver Canucks team that could be kindly referred to as transitional. Edmonton has some roster issues of their own, so I think it is fair to credit the goalie, some of the defensemen, and a group of forwards who could have cashed many times, but managed to score enough to win.

Oilers have improved in many ways year over year, they have eight more wins, 10 more points and the Goddams are pretty damned good. Edmonton has a bunch of things to fix, and they need to keep what they have so acquiring new pieces should involve cash, picks and extra pieces from areas of depth (LH blue).

#Oilers goalie Cam Talbot is 7-2-1 in his last 10 starts with a .948 save percentage and two shutouts

The Oilers had enough talent to roll over the Canucks, but that blue line above missed a lot of opportunities to get the puck out under control. I don’t blame them, and credit to Vancouver, but if you add four capable blue to Sekera—Fayne next season and things should idle smoothly. G Money noticed that the mid-game move of Nuge up to the big line did not have the desired impact (graph via G): 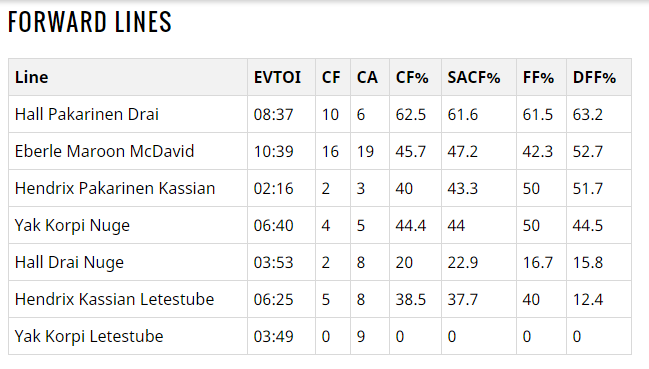 GMoney made a point of saying he wasn’t sure, but it does explain the wobbly TOI for the lines and that graph above is a concern. To my eye, the math is saying the Sedins toughest situations came from Sekera—Fayne and Hall—Draisaitl—Pakarinen. Leon was 6-4 against the Sedins. That’s some quality work on a night when Daniel and Henrik went 17-11 (13-5 away from the Leon line).

There's a legitimate argument to be made that Patrik Laine should go 1st OA – especially if a team is confident he can improve his skating.

Zac is a bright guy, worth a follow. I have heard this idea from people that will talk to me and have read it here and there. If the Oilers win the lottery, one wonders if they might be willing to deal down for a consideration. Laine is scoring in the Sm-Liiga, and that is a pretty good league (although the NHL equivalencies I use have Auston Matthews Swiss League as being more substantial).

Mark Fayne has had a good first period by my eyes. A couple of very good defensive plays to break up rushes. #Oilers

Mark Fayne is the Rodney Dangerfield of Oilers hockey, but I think he is a solid NHL player. In a perfect world, he would not be on the top pairing, but as has been the case with so many Oilers veterans (hello, Shawn Horcoff!), we often choose to blame the veteran for batting in the heart of the order, as opposed to blaming management for creating a flawed lineup. I would love to see him back here:

McLellan ran some nights in San Jose with six guys who could play the middle, and he uses Matt Hendricks and (earlier, plus last night) Leon Draisaitl in that way. Having more than one center gives the coach all kinds of options, and is one of two things we isolated about the coach last summer (the other being a Melker Karlsson always in the mix. His Melker Karlsson this season? Iiro Pakarinen. Apparently it helps to have a wobbly name). What about this?

When we get to the Darnell Nurse portion of the RE series, I am going to be looking at rookie comparables. It is not a pretty sight at this point, and while it is fair to point the finger at management (Nurse played with Andrej Sekera for a time on the top line—unwise), the season has been a struggle. I think it wise to suggest the Oilers would do well to make their plans for next season based on Nurse once again starting the year in Bakersfield. Perhaps that gives them enough room to keep Mark Fayne on the roster. Doubt it happens, but in my opinion that is the play here.

2016 DRAFT OFFERS A LOT OF OPTIONS FOR THE OILERS