We’re counting down (thanks Casey Kasem) to the end of the season, with Connor McDavid’s point total and Oilers total points the last remaining things that hold importance (work with me here, people).

In G75 a year ago, the Oilers ripped through the Dallas Stars (!!!) 4-0, with Benoit Pouliot having a nice evening. The Oilers have a chance to post their second .500 month of the year, and they could also finish with 30 wins (first time since 2011-12 if they make it) and with 70 points (also first time since 2011-12, I think you could compare this team and that one—maybe we will). 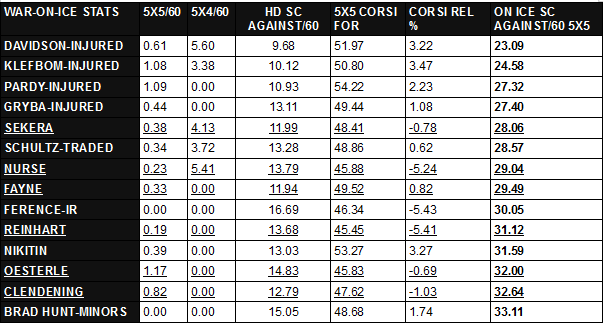 ETHAN BEAR, DRAFT PLUS ONE

Ethan Bear had a good night last night, going 1-2-3 in a comeback win for Seattle over the Portland Winterhawks. A player in draft plus one season should take a big step forward, and Bear (plus Caleb Jones) have done exactly that this season. Here are some fairly recent D+1 performances by CHL defenders taken by the Oilers:

And now, let’s compare Bear and Jones to recent top 20 overall selections in their D+1 seasons:

The best of the best (Seth Jones, Aaron Ekblad) made the NHL or scooted straight to pro (Julius Honka), but both men show well in draft +1 against prospects who held a much higher pedigree. The trick is to keep it going and stretch it out in draft +2—but at this point signing these two prospects looks like a no-brainer. Congratulations to the Oilers scouting staff, and to Philadelphia—Provorov and Sanheim will soon be joining Shayne Gostisbehere on a young and fabulous blue.

One final note: Darnell Nurse is not a feature player on this list. We are not judging the complete range of skills, only the offensive portion. Still, it does give us a different view of the player when placed next to his rookie NHL year (61, 2-6-8 .131). His current comparable among Oilers rookies in the last 10 seasons? Ladislav Smid (77, 3-7-10 .130). I know, I know, early days, but math doesn’t care if someone is a highly-touted prospect, math only cares about math. Math is telling us something about Darnell Nurse this year.

On the draft, some scouts/GMs I talked to last week were discussing whether Juolevi might displace Tkachuk as consensus No. 4 after Big 3.

The NHL draft lottery goes at the end of April, and the Oilers are in a good position currently to win one of the first four spots in the order. The top three seems established (Matthews, Laine, Puljujarvi) but that middle area—No. 4 through No. 7—seems to be in flux. I posted my most recent 30 last Sunday and slotted Matthew Tkachuk, Jacob Chychrun, Mikhail Sergachev and Alex Nylander 4-7—then talked to a scout who told me the fourth best player in the draft is Olli Juolevi. That tells me that we are in the ‘we don’t know what we don’t know’ phase of the draft right now. Long stretch of highway before the final final.

I genuinely think the Oilers have to entertain offers for their first-round selection, and if the return addresses that defense, then Peter Chiarelli must pull the trigger. I don’t think many people believe it is the correct thing to do, but for me another phenom forward has less value to the Oilers than (possibly) any team in NHL history.

Peter Chiarelli added Cam Talbot, Andrej Sekera and Connor McDavid last summer. This summer, adding James Reimer, Jason Demers and Jesse Puljujarvi ignores the real issue. Now more than ever, he needs to add very smart bets on defense. Actual NHL players with some success against the other team’s best, who can play a two-way game—and that includes moving the puck consistently, and well.

That is his assignment. The pick has less value to Edmonton than any of the other 29 NHL teams. I believe this to be true.