When was the last time Oilers fans knew normal? Is there a new normal? As I write this, it occurs to me that most of us are looking for a brand new day, a better place, but identifying that place, defining it, is a distant bell. What is the current normal? What should be the new normal?

"We may not be a playoff team, but we have playoff fans. At some point, we have to reward them." Coach McLellan on #OilCountry support

Edmonton is running out of track now, it would be nice to hit 30 wins and 70 points but this week they will be playing at Phoenix, at San Jose and at Los Angeles. This is going to be a tough seven days for the McLellan Oilers. 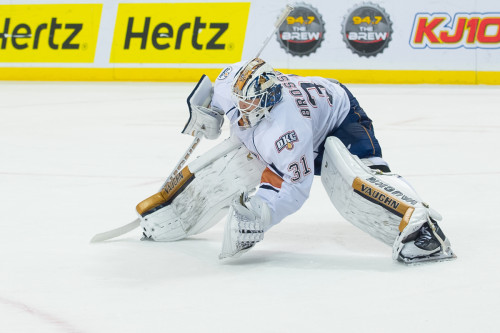 Connor McDavid, over 82 games, would be on pace for 86 points—as a rookie. The voters have not been kind to the Oilers in the last 25 years, but I would submit to you today that if McDavid was a Toronto Maple Leafs player this vote will be far closer than it is going to be in fact.

Among the curious prospects bubbling under for this year’s draft is a man named Egor Babenko. He is a 1997 (turned 19 in February) and an undersized (5.09, 157) RW who shoots left. Hailing from Tyumen, Russia (the first Russian settlement in Siberia, 1586—Jagr was born one year later), he played damn well in the MHL (Russian junior league) but came over to Canada anyway. He went 67, 29-40-69 on a very good Lethbridge Hurricanes team this year and at least one member of our community likes what he sees:

These little guys can and do make the NHL, sounds like Babenko has altered his game to fit the North American style quickly—that speaks to intelligence. I don’t know how deep my draft coverage will get this time, but if it reaches 120 names as it did a year ago, Babenko will be on it. His NHLE is 82, 10-13-23. I will post these from time to time during the spring as we get closer to draft day.

I understand the need for a righty (Letestu is getting chances, has all season) and would suggest that McDavid, Nuge and Hall are all fantastic lefties. Eberle is taking heat for dusting off the puck, but he surely is the best RH sniping option on the team. Nail received a pass from 14 last night just as he left the photo, incredibly bad timing some are placing on Eberle but I have to say 10 has to stand in there—where the hell was he going? Anyway, the power play has left lots of points on the table and has to be fixed.

The list of UFA RH forwards is pretty decent for the Oilers this year. Plenty of names & at least a couple should be value deals.

If push comes to shove, Lee Stempniak is available and God knows Oilers fans are familiar with that guy. The list of availables is large (here), but it is important to remember that when adding righties the sheer number of lefthanded men may need to be culled. The top 9F could be housed by available LH men (Hall, Pouliot, Maroon, McDavid, Nuge, Leon, Eberle, Yakupov, Pakarinen or Kassian) at a 77 percent clip (7 of 9) as it stands. Someone has to leave the Leftorium.

A fun show to start the week, lots of Oilers and more. TSN1260 at 10, scheduled to appear: