Connor McDavid is averaging about two insane plays a game these days, we are still in awe of him because there is no historical reference for his speed—ask NHL defensemen. Some day, maybe next year, we will come to expect that burst and the defensive fracture that follows. For now, it’s Saturday in hockey country and our hero is the fastest man in the west.

Oilers grabbed one in San Jose and are now 1-1-0 for the week. You would be wise to assume an L this evening, just as Edmonton did a year ago in G78 (an 8-2 loss to the Kings). Anton Lander had five shots, Matt Fraser four on Golden Seals night in California. 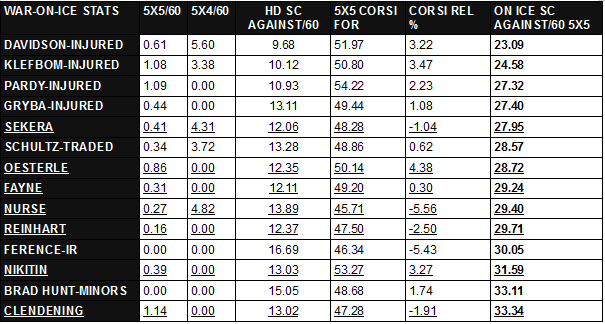 I wrote a piece over at ON last night, looking for input on the Condors ROY. Also interesting? Of the kids who have been rookies over the last two years, who had the best rookie year? It is interesting to line them up by position.

Little doubt who is the superior rookie here, although Laurikainen didn’t play as much and that can impact things. I don’t think anyone thinks the Oilers regard the Finn as highly as Brossoit, and of course we should acknowledge that both of them could easily end up outside the NHL.

Laleggia ends up being a superior overall offensive player, but we have to factor in the fact that he played forward as well. At even strength, Laleggia (.321) is ahead of the Oesterle of one a year ago (.277)—but that time at forward skews the numbers. We should allow for the possibility that Laleggia might be a more substantial offensive player, though.

Remember, the forwards produced in the AHL are not the impact scorers, they are the Cleary’s, the Chimera’s and the Pisani’s. Pisani as an AHL rookie posted .481 points-per-game at age 23—and he played in the minors for over 170 games. There is still time for all of the forwards here, but as our annual look at the AHL shows, you better spike like Khaira in year two if you plan on having an NHL career.

The trade Taylor Hall rumors have died down for now, Jon’s numbers should put those to bed for the rest of 2016. Here’s the thing: There are players you would trade Taylor Hall for, but they, like Hall, are largely unavailable. Look, the Oilers dealt for Chris Pronger a decade ago (three-for-one!) and I would love to see it again. Problem is, you need a partner, and NHL teams hold on to their impact defensemen for dear life. Why? Fear of becoming the Edmonton Oilers.

Who would I trade Hall for? Well, Erik Karlsson for sure, and most of the guys playing over 26 minutes a night on this list. Guess what? They aren’t available. If Hall is available, and PC is talking about a Tyler Seguin style reverse three-for-one, then we are talking about the enemy within. Again.