I remember the day Nail Yakupov was drafted like it was yesterday. After many months of zero information being available, suddenly it was all out there. Before the draft, I heard:

In the end, I wrote three different No. 1 overall posts, one I published day of, and the others later:

Nail Yakupov: 'I asked a trade and #Oilers gave a permission to speak to other teams, about 8 of them were interested, but smth went wrong'

Suspect the return was not substantial enough, but also believe we will see the trade go through over the summer—possibly before the draft. For the record, I still think drafting Nail Yakupov was the right call. What went wrong? Sometimes in life, the truth is hard to come by, but, no matter the exact sequence of events, somewhere in there the die was cast. It’s nobody’s fault, but: That my friends is not a good line, any time, when it comes to your life story. If I could, I would tell Nail he is going to be fine, there’s a place for him where he belongs. In a quiet moment, I might even imply he is the lucky one, and you could absolutely make that case this morning. I think they drafted him, but never embraced him. One day, someday, one of us might have a chance to share a coffee with Nail and Ralph, and talk about what might have been. Far from skype, and the fog, a brand new day.

One of the main problems for Yak is shown here. The left side is the skill group, and mercy Nail should be there. Now, he IS there if Connor McDavid is his center (2.38/60 5×5, Corsi over 50 percent), and is not with Mark Letestu (0.28/60 5×5, Corsi of 43 percent). I don’t think he will be remembered well as an Oiler, but he isn’t Greg Joly or Patrik Stefan either. He arrived in a time of braintrust addlement and was not well equipped for the job of overcoming it. That’s no sin for a young man.

Next up? I think we will have a new answer this summer, but it is a good bet there will be no questions this fall that feature the young Russian as the answer. After all those years of ignoring Russia, this is the payoff? We hoped for the best, but never thought it would be this bad.

LOST TOGETHER, YEAR OVER YEAR

Oilers lost G79 to the Flames 4-0, as the hits kept on coming. If the Oilers can win tonight, you would have to think 70 points is within reach, I think that is the final goalpost available to show progress (unless they can gets the GD below -30). 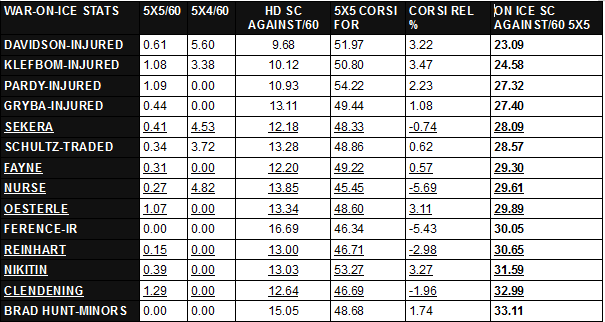 The one area of the roster Edmonton has depth is LH defense. That depth is compromised currently, but if Oscar Klefbom and Brandon Davidson are healthy, could Chiarelli cash some of that depth to address RH side? If you ran Klefbom, Sekera and Davidson LH side, and kept Fayne for RH side, could you acquire two righties with a combination of Darnell Nurse, Griffin Reinhart, Jordan Oesterle and David Musil get you anywhere? Don’t know, but Darnell Nurse was apparently part of the ask for Dougie Hamilton last summer, so he should have substantial value. I don’t think Edmonton trades Nurse, he fits their template too well. What about Klefbom or Davidson? One imagines their injuries have either reduced their value or delayed potential deals until health is proven.

Lots of experience, and if you have two of Nurse, Reinhart and Oesterle on the farm then the callups will have some chance of succeeding. I am not a big fan of trading players before five years after the draft, those years need to burn off before you know what you have. We are year three of Nurse, don’t think the Oilers will deal him. But if he is the ask in a Hamonic deal?  Interesting idea.

WHAT COULD EDMONTON GET FOR YAKUPOV?

Tough question. Nail  can be a successful winger, but a team acquiring him has to assess if he is above what we might call replacement level. By that I mean the following: Does Nail Yakupov, as a feature player in your lineup, deliver a stronger goal differential than a replacement-level player like Lee Stempniak? Because Stempniak is unlikely to cost more, and might cost less—plus he has shown an ability to serve as a solid plug-and-play option.

Nail Yakupov could stay here next year, play on the McDavid line and end up on the left-hand column above—I believe that to be true. More than that, I believe Todd McLellan entered into the year with the intention of unlocking Nail, and Justin, and others. It did not happen. Remember that media avail where McLellan talked about these kids hearing the same message from different coaches? And remember when he said maybe the players should ask themselves if it was more about them?

We are here. The one lingering question I have, is this: What if it isn’t about the player at all? What if these gifted but flawed men simply needed a more sound organization behind them? I believe that is a question worth asking today.

A busy show as we hit the airwaves for the first time since Thursday. Scheduled to appear:

10-1260 on text machine, @Lowetide on twitter. I will also be on the roundtable at nine. Talk soon!