Saturday. HNIC. Battle of Alberta. There was a time when you could feel the excitement building early in the day. There was no sports radio then, but the EJ and the Sun would have all the coverage—mostly reminding us of past battles, possibly listing suspensions during the season that came from the Oilers-Flames ongoing war. And it was a war, and that’s for sure.

THE WAR IS OVER, YEAR OVER YEAR

G80 was a 4-2 win for the Oilers over Los Angeles, led by Matt Fraser and Tyler Pitlick offensively. It was a devastating loss for the Kings, and a great night after a massive personal loss for Oilers goalie Richard Bachman. The Oilers may well finish No. 30—they are currently last—but they do have some say in how this ends. The club is rested, possibly getting some help (Friday rumor had Adam Pardy drawing in for Adam Clendening) and it would be nice to carry a good memory from the last Rexall BOA. Hurry sundown. 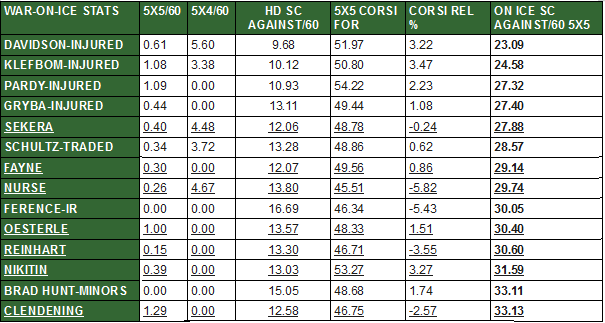 Connor McDavid has been named Rookie of the Month for a 3rd time in 2015-16- has won any month he's had over 1 GP in pic.twitter.com/lEChHmm1wr

@Cody_BJACTRWJ @arcticicehockey Goes without saying that we’d rather be in the playoffs. A fifth lottery win in seven years will be fun too.

I am sure Batty will take his share of lumps, but for me that is the exact equation. Good lord people, what are Oilers fans supposed to do? If you are an invested Oilers fan, the playoffs would be manna from heaven. They are not available to you. The next major event on the fan calendar is the lottery, and if you’re going then good grief you might as well win. I don’t understand the group of people who see it differently.

I am very interested in seeing how the Mike Hoffman fiasco works out this summer (the Senators have hammered the young man every step of the negotiation way, even to the point of winning a punishing arbitration last offseason) and he may be dealt by the team. Oilers would be wise to get in on that, and any number of young Senators that an addled and disgruntled management group may choose to flush. Are they crazy enough to trade a big piece?

Larionov says he has "a lot of respect" for Peter Chiarelli, who "kept everything professional and quiet" concerning Yakupov. #Oilers

I think having a veteran GM in place this summer should give Oilers fans some confidence for the future. Comes the reply ‘Griffin Reinhart trade and Lauri Korpikoski’ and I hear you. That said, the goaltending got some help last summer, and the Sekera signing has been viewed as a positive in most precincts. If Chiarelli can add Travis Hamonic, a power-play QB who can play third pairing, a Lee Stempniak and a new Pisani (along with a backup goalie) things should look better in the fall. I don’t think Yakupov will be here in the fall, and wonder how many of MacT’s Russians continue with the organization on any level. It has been a weird and bumpy sojourn into Russia since 2012.