I am not sure how many will agree with me, but in this blog’s estimation signing Andrej Sekera in free agency was a quality addition. The only FA signing in recent years that was close? Benoit Pouliot. Peter Chiarelli will be active again this summer and his shopping list is once again substantial. 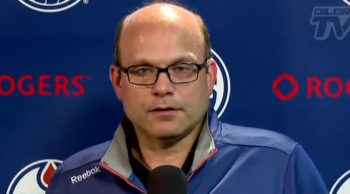 I thought it might be an idea to check what is out there on the free-agent market as we get closer to July 1. Edmonton could be active in the goalie market, on defense, and while we are at it let’s check the forwards too.

This is all via nhl.com and nhlnumbers. Chiarelli will no doubt kick tires on a backup—someone who could take over the starting job if necessary—and that seems like it should be Enroth or Reimer. Edmonton doesn’t need to hire a backup, but the small sample size that is Laurent Brossoit’s  NHL season suggests the GM should look for some cover.

I don’t see another great fit among the righties, perhaps there is a lesser defender with potential but honestly it is not a strong group. Depending on the ask from Demers, he might be available and I do think he is a nice fit.

In looking at the options, perhaps Edmonton might be better off signing a lefty and then dealing from (further) strength—dealing a lefthander for a righty. Campbell is long in the tooth but remains effective, and he could serve as a terrific mentor. If the Oilers can acquire Travis Hamonic for a lefthander? Well, the option is there if Chiarelli signs someone on this list.

I include Stamkos only because he is going to be available and Peter Chiarelli should push as hard as possible to get him to Edmonton. Can you imagine winning the lottery and Stamkos? Heavens to Murgatroyd that would have heads exploding all over the league! Anyway, clearly fantasy but if there is a chance we can entertain the idea.

I have mentioned this a few times, have had people push back so want to be clear again. I think the Oilers are set (and then some) with Hall, Pouliot and Maroon on the port side, and if those three men return no one should be complaining. That said, I wonder about Milan Lucic and his possibly being available. Peter Chiarelli’s stated template:

Lucic and Brent Seabrook represent (to me) players that may both be available (Seabrook has a NM but has been linked to Edmonton) and carry significant risk. When have the conversation about this summer, I think we all talk about ideal situations, but there are some heavy contracts that could be on the run this summer. I think the Oilers will be at least somewhat vulnerable to the Lucic’s and the Seabrook’s—famous names with a lot of what makes them good now having been spent. Dangerous summer.

So far this spring, we have talked about players who might be traded by the Oilers. In reality, we may be looking at a ‘switching out’ of a current Oiler and bringing in a free agent replacement. Say the Oilers acquire Travis Hamonic for Jordan Eberle, and then replace 14 with Loui Eriksson. Or, Taylor Hall is sent away for a grand return on defense, and Lucic replaces him. Or Nuge—Backes and on it goes. For the record, I would prefer seeing Hall, Nuge and Eberle return, Pouliot too. Anyone above appeal to you as a possible future Oiler? I like Demers, would prefer to keep the current forwards.

Saturday night, Elliotte Friedman mentioned Lyon’s decision was 48 hours (or so) away, so that puts the press release inside the Dave Jamieson Show. If the young man signs with Edmonton (he has posted SP’s in the .930s last two winters) he could land damn near anywhere on the pro depth chart this fall. He appears to be a good get, although that conference Yale plays in seems to feature some electric save totals. Button down conference, for sure.

Bob McKenzie seems to think that Draisaitl and Nurse are the most untouchable Oilers outside of 97. Um…Taylor Hall?

I think the Oilers list of no-trades is fairly short at this point (I will guess McDavid, Hall, Draisaitl, Klefbom, Nurse) but as I have mentioned a few times it will depend on the ask from the team trading their quality defender. Let’s imagine the Peter Chiarelli white board and what the ask might be:

Now don’t go crazy, I am just using this as an example. All of the veteran forwards are in play, and so would be outside the no-trade list Chiarelli would have established internally. So when we talk about the players who are not going anywhere, they are basically the McDavid cluster—97, Leon, Nurse. Makes sense to me.

AND THE LORD RAINED DOWN BURNING SULFUR

The MSM took Todd McLellan’s Saturday postgame and ran with it, openly pushing for ‘Christmas in July’ headlines involving the breakup of Edmonton’s most famous boy band.

I understand the idea of torching the team again, but am hopeful Peter Chiarelli takes a more measured approach to the summer. All these losses give him another fabulous draft pick, and he could trade down—or out—for his badly needed defensive help. He could also trade one of the $6 million dollar men and sign Demers, effectively doing a tweak as opposed to blowing it up.

It is a bad time to be heading to market, with your prime bullets being devalued by another losing season. The standings suggest there has been no improvement this season, but the goal differential and the 5×5 scoring suggest real progress. I would argue that the Oilers could have been better even with all of the injuries—but playing Lauri Korpikoski and Darnell Nurse so much impacted the season in a negative fashion.

This point in time reminds me of the summer Edmonton fired Tom Renney. He was making progress, and it has taken many years (four!) to get back to what Renney had idling in the driveway. Keep your powder dry, Peter Chiarelli, these are good hockey players and you do not want to be the man who trades Taylor Hall for 60 cents on the dollar. This town will never forgive, no matter what the scribes are writing today. And that’s for sure.

A busy show this morning, starts at 10 on TSN1260. Scheduled to appear:

BETTER LEARN HOW TO PRONOUNCE TKACHUK

151 Responses to "THE LORD’S BURNING RAIN"