I had never seen an NHL game. Most people who lived in Edmonton in 1979-80 had the same lack of experience, and the difference between the WHA and NHL was massive in my mind (although the upstart league was damned entertaining). They were so fast—faster now—and the passing and creativity was wizardry. We were all spoiled, of course, because those who saw their first NHL hockey at Northlands 1979-90 were seeing the perfect beast, the ultimate, the best of all time. Getting back there keeps us hanging on, year after year.

I have watched the Edmonton Oilers through good times and bad at Northlands/Rexall, and the good lord willing I will be able to find a way to the new arena. The Edmonton Oilers occupy a giant space in this city’s collective consciousness. It has been a very wild ride. I hope for better days, for all of us.

As we have been discussing all year, the Oilers have shown improvement. With better health, and fewer roster drags? It’s all over now, baby blue. G81 a year ago was a loss (3-1 to McLellan’s Sharks despite Brossoit standing on his head) on a night where Edmonton decided to give a rookie goalie no help at all. Le sigh. 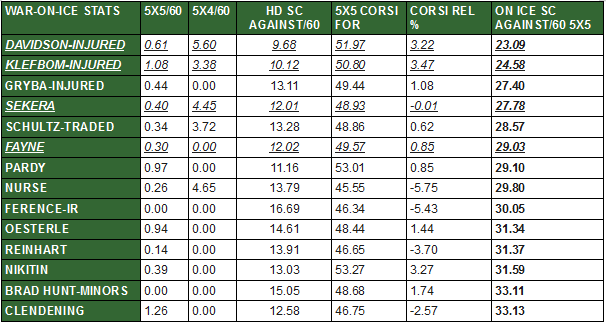 TEARING DOWN THE BOTTOM SIX F 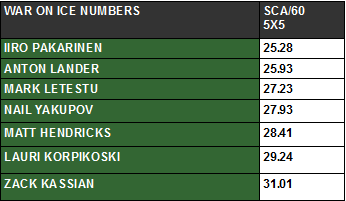 This assumes the Oilers trade the first-round pick for immediate defensive help, and flush men like Yakupov and Korpikoski. Miles to go, and of course no guarantee these useful free agents sign.

We had an interesting chat during last night’s draft thread. One of the conclusions some of us are reaching is this:

Most of this probably comes from the fluidity of the draft after No. 3, but there is a reasonable argument to be made that the No. 7 pick might get you the best player on the board after the top two picks. For instance, who is the best defenseman in the draft? I think the 30 teams may split on the answer.

Tonight is the last game at Rexall, #99's statue will follow the Oilers to their new rink. This pic was taken in '89 pic.twitter.com/RxxDhwsOKq

The Gretzky statue is going to get another tour of the downtown area over the summer, wonder if they add another statue in the years to come. I think we have the subject in our sights, all we have to do is enjoy the ride.

I will tell you the Stanley teams are special memories. Forced to choose, I would offer up the 1984, 1987 and 1990 clubs as my inner circle favorites. Further pushed on the matter, the 1987 team is probably the best one to my mind (Tikkanen was on the team, 99 and Coffey were still there, too). It is a ridiculous argument of course, they were all beautiful.

I loved that 2006 team, and for me, that is the team I will say goodbye to tonight. When the Oilers move over, the statue and the Stanleys and the future go, too. Memories of Stanley Cups live forever, but that 2006 team was the last great moment, the last time chills. In this beautiful game, you rarely get a chance to bond with a team as this city did in 2006, and that memory remains with me today. Thank you Chris, thank you Fernando, thank you Ryan, thank you Dwayne, thank you Jason, thank you Shawn, thank you Ales.

There was a time in this century when giants walked among us. When they turn off the lights tonight, that team may well be forgotten as time passes. Not for me. They shine like a diamond. Always.

10 this morning, TSN1260. Memories from Bruce McCurdy, Nathan Dempsey and Steve Lansky, and we will open up the phone lines for your memories, too. 10-1260 text, @Lowetide on twitter. What an incredible ride.