The Oilers finished their season on the left coast last night, showing management and the coaching staff what the team is lacking—although we can be certain everyone on planet earth knows by now.

The Oilers season is just done now, we have plenty of time to review it. I will list injuries, defense and some unusual personnel decisions as major issues, but will also suggest we should go back to summer—and yet another year of management deciding to leave the hangar without balance. That cannot happen again, and this team is close. Who is leaving town, then? More on that in a minute.

Sad to see the #Condors break the playoff streak the #OKCBarons started in 2011. #Oilers

It is a very negative turn for these young players, too. There is no winter league (summer league) for hockey, but maybe there should be for guys like Nurse, Reinhart and Khaira. Patricia brings up a great point about those Barons teams, who pushed every year into the second season. The California teams are stacked, Edmonton did not have the same kind of prospect playing on this team. That is a problem, and of course the other teams are signing their draft picks while Edmonton has none to sign.

For the most part, this blog discusses what the Oilers will do, as opposed to what I would do. Yesterday, I made the argument that staying the course—while adding through free agency and tweaking with smaller trades—is the best route for Peter Chiarelli. Many of you disagree with that way of thinking, and I suspect PC will be more aggressive than I would like him to be this summer. Who is going? I will give my opinion, you give me yours. The following either could or will be gone:

Unfortunately, I don't think Connor McDavid will be first #Oilers player to win Calder Trophy. Auston Matthews will be.

A little table to illustrate the non-trivial team improvement for the Oilers this year. pic.twitter.com/l7LKUFgwAt 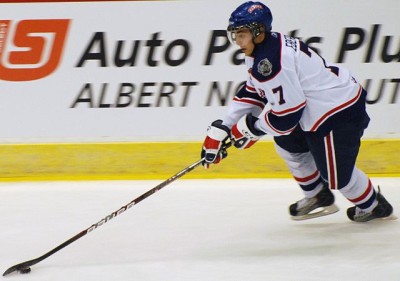 I think we have seen the last of Eberle. We wait.