Todd McLellan gets his chance with the media today (10am! It might even show up on the Lowdown!) and I imagine we will hear some encouraging words about the future. I have to say that Peter Chiarelli did a good job yesterday in terms of setting expectations—no overpromising, which can lead to under delivery. Before we move forward, let’s step back a sec and review some of what the GM said in the media avail a few hours ago.

This is important, because it shows how much value the GM puts on the player. I have been told that Chiarelli has expressed these sentiments previously, but I had not seen, read or heard them. Heartening. Even if the Nuge is dealt, and it doesn’t sound like it, PC made it clear there is a strong value on the player by this organization. Glad to see.

Chiarelli confirmed there was no long-term issues, which means two things. First, all the people who told you about cutting muscle from his leg were either making it up or talking to people who were making it up. Second, the Oilers not telling people what is going on may lead to bloodletting stories, leeches stories, dragon stories, eraserhead stories. For God sakes, be careful out there! 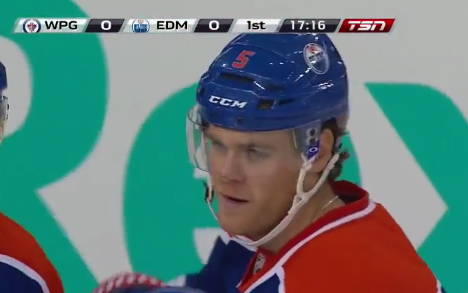 We talked last week about Darnell Nurse and how well he played for 11 games—before heading south as part of the ‘let’s play a bunch of people not named Mark Fayne with Reg’ portion of the year. Here is another angle: Corsi (and Rel percentage) since January 1, 2016:

Chiarelli's year-end done: a couple thoughts for U. IMO…Klefbom, Sekera, Davidson and Nurse will be in the Oilers top 6…

Oscar Klefbom didn’t play after January 1, but he was 50.8 (+3.5) and Sekera plus Davidson look good by the possession. Nurse? Seems to me that is an odd choice, and skipping over Mark Fayne to get there suggests Peter Chiarelli is willing to sacrifice possession for things like speed, size, aggressiveness and—if we are being fair—the possibility of a better tomorrow (should Nurse develop). Did Chiarelli make these kinds of decisions in Boston?

We have had this argument since before I started this blog, back to the hfboards days. I remain convinced size is a good thing—as long as the guy can play! I like Darnell Nurse as a prospect, honest. If you have read these pages since he was drafted, suspect that is fairly clear. That said, part of the balance equation is keeping young, unready players in the minors until ready.

DARNELL NURSE DID HAVE A GOOD RUN. HONEST.

How can the Oilers get Darnell Nurse back to those numbers? Put him on the third pairing with Brandon Davidson, and that is my guess for 2016-17. How many defensemen can a team protect and still make the postseason? Don’t know.

Hmm. Bartkowski, Miller and McQuaid are in that range (Rel %) and of course the young Oiler is just 20 and a rookie. I like Nurse, hope he has a terrific future, and I know there is exactly one person reading this (once I read it) who believes Mark Fayne  can help. That said, on the day we begin to explore the possibilities for this team (and that is today), I would like to point out that my pal Corsi and I are not happy. Not happy, at all.

I love expansion drafts. Don’t ask me why, it is such an obscure and ridiculous slice of the sports pie it is to laugh. And yet, I know things about expansion drafts (Montreal Expos took future manager Jimy Williams in their draft) no one should consider worthwhile because it is a passion.

Ed Snider’s expansion draft (along with his purchase of the Quebec Aces and previous hiring of men like Bud Poile and Keith Allen) stocked the shelves immediately and Philadelphia has enjoyed a contender pretty much since that day. Seriously. I have no connection to Ed Snider or the Flyers beyond a real and genuine respect for the accomplishments made by man and organization. Hell, the only reason Philadelphia got an NHL team was Snider’s curiosity. In a world where winning is the only thing, Ed Snider was an exceptional owner from day one. RIP.

Very well, PK Subban can play for my hockey team. What’s that? I don’t have a hockey team. Give me Subban and I will.

I guess P.K. Subban has some issues, based on the Jack Todd article and many other things we read out of Montreal. Folks, this is a giant opportunity. The Habs are making a big mistake here, and someone is going to get a helluva defenseman. Is Subban flawed? I guess he has some outside issues, but not everyone can be Chris Pronger!

P.K. Subban would be a perfect fit for these Edmonton Oilers. They would have to give up a mountain of assets and they would have to adjust their cap (Subban is a $9 million cap hit through 2022) to make room. That said, you make that room in a heartbeat.

I have included two RWs because one assumes Subban’s price will include an Eberle or a Nuge, a Nurse or a Davidson, a pick or a pick. Seriously no idea where you start in a trade with Subban, save for the fact someone making $6 million would be heading out of town. Crazy crazy. We’ll sell you the whole seat for summer, but you will only need the edge.

135 Responses to "THERE’S A CHANGE IN THE WEATHER"