Leon Draisaitl is Paul Bunyan, with a stick the size of a tree and hands by Charmin. He arrived in training camp without a job certain, and despite working hard and showing well, was demoted to the AHL. I have thought about what LD might have been going through at that time—you know, sometimes young people react badly to that kind of thing—but he went down to the farm. He did not perform expertly in Bakersfield, but the hockey Gods offered up the gift of injury. Leon scored twice just after his plane landed, and he drove from there. Leon Draisaitl is a substantial young NHL player. (Trust Yourself) 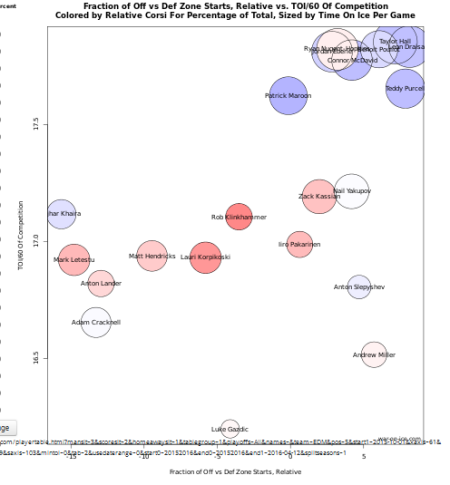 Draisaitl got the push and the linemates, but he also delivered. As well, this is a player with size. We can talk about wing or center (48.4 percent on the dot, that isn’t bad) but it is important to acknowledge this as a terrific year by a young, emerging player.