Peter Chiarelli traded an enormous number of draft picks away last year at the draft. He could afford to in a way—his first-round selection (Connor McDavid) was a guaranteed blue-chip player. Edmonton appears to have used their picks after No. 100 well, but the problems in the system are very real and extremely obvious. The Edmonton Oilers don’t have enough quality prospects—in goal, RHD, LW and RW. That is a fact.

I believe the team needs to stand and deliver on many of the picks currently on their draft board.

Edmonton used only one selection in the top 100 last season, but PC has five this spring. I have little doubt one of those picks is heading somewhere, but am hopeful the organization plans on posting a recovery draft. Here are all of the players under Edmonton’s control outside NA pro hockey:

There are some names we will never see again, and there are some talents who will never see the NHL. Among the prospects listed here, I would list defense as having the greatest depth—there are even two RHD in this group. The four goalies are not blue-chip prospects, that is an area of weakness. Centers? Nothing shaking. Wingers? Crickets. There is work to be done. 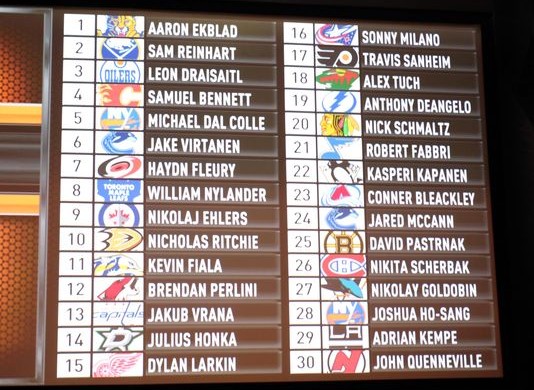 We’ve talked about a few trends for this draft season and I am hoping to see a few things from Edmonton this year.

If we apply all of those rules to the available picks, here is what the Oilers draft could look like:

Protection of 7 forwards, 3 D and goalie or 8 skaters and goalie remain in rules. Exemption for 2nd yr pro as well. https://t.co/bPjbXUdHnx

We are getting closer, suspect the expansion draft date (2017 is possible) will be announced very soon. Never assume anything with the NHL, they could announce 2018. That said, it does impact Peter Chiarelli’s course of action this summer in a very specific way: He will use the first-round pick—that player will be exempt.

Raider Jesse has been on top of this from the start (along with the usual suspects) and is suggesting on twitter this means Edmonton will keep their pick (I agree). I have taken a patient stance, knowing the NHL could slow play or fast track at a moment’s notice. This does appear to be real, and I would differ a little for RJ (below). Connor McDavid and Darnell Nurse (as I understand it) would not have to be on the list (Raider Jesse confirmed that was his understanding as well).

per @DarrenDreger expansion rules to include exemption of 2nd yr pros. Assuming definition of 'pro' remains per CBA pic.twitter.com/LhMModhuOS

That is my list, your mileage may vary. Remember, Edmonton loses only one player, so the way I have set it up the expansion team likely takes a LW (Pouliot, Maroon) or a young blue (Reinhart will have value to an expansion team). There is another way:

James Reimer led the NHL in even-strength save percentage in 2015-16 (.938). He is a free agent this summer coming off a two-year deal that provided a cap hit of $2.3 million. If Peter Chiarelli signs Reimer to a multi-year contract this summer, he will have two goalies who have reasonable contracts and a good chance to show well in the coming year. If Reimer can deliver quality, Edmonton can be somewhat confident their goaltender will be chosen—effectively ensuring the rest of the roster remains intact. Failing that Chiarelli could make a deadline deal in 2017 to grab a goalie from another team, putting Edmonton in the same spot as the potential Reimer signing.

Trust me, this has worked before and it is an effective means to expansion certainty. I don’t often prattle on about my expertise (if is however implied in every line 🙂 ), but this expansion draft business has occupied a lot of my time as an adult.

One final thing: Beware of making too many expansion draft protected lists. Why?

Friedman: "If Edmonton wins (the draft lottery), I'm going to love to see what Chiarelli unleashes trade-wise with his team." #Oilers

Friedman: "There already are a lot of (trade) bullets, but if they win, it's like a nuclear weapon you can deal." #Oilers #draftlottery

I am with Raider Jesse on this one, the lottery pick will have extreme value because it can be added to the list of players who (as I understand it) are expansion draft exempt:

That is a pretty fantastic list. Now, in drafting Matthews, it does allow Edmonton to trade a forward (perhaps Pouliot or Maroon) in an effort to improve the team. Miles and miles of words to say this: Keep the draft pick—if the plan is to expand next spring.

Sail on, Niklas. We seriously never knew you. All the best.

I'm inordinately excited about the draft lottery. I can't tell you how badly I want the Oilers to win again, just to watch the world burn.

I went into last year’s lottery believing Edmonton would not win and have set my mind to the same number (’11. It goes to 11′) this time. I would have liked to read the entire lottery selection document thoroughly, because Lou has been in Toronto long enough to slide a ‘trap door’ clause into it. Probably saying something like ‘if Edmonton wins the lottery, the snakes and ladders rule activates, and they slide to No. 46 overall’. You think I’m joking. 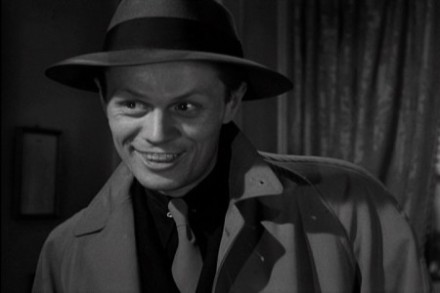 Instant show prep if the Oilers win! Haha. A fun show on the way, beginning at 10 this morning on TSN1260. Scheduled to appear: