So far this spring, the Oilers have been adding futures, although I think Drake Caggiula may end up playing some in 2016-17. Word this morning that Peter Chiarelli is about to make a move with one of the team’s free agents.

EDM and Zack Kassian are closing in on a one-year deal.

The one-year aspect is a positive tell, reflects caution (which is warranted) and the fact Kassian clearly has value to the team. I don’t think he is yet a lock as a full time member of the top 9F, but that could come this season. Before 2015-16, Kassian posted 27 points per 82 NHL games—Benoit Pouliot averages 39 per 82, Nail Yakupov 36 per 82—and the rugged winger may have found a home.

The Oilers have work to do on RW—chances are Nail Yakupov will be dealt—and Kassian has a chance to fill a role on a significant line. Edmonton did not have a bona fide 3line this past year, Kassian and Benoit Pouliot/Patrick Maroon could be the solution on the wings. We will see about how dear the contract, but I am generally pleased by today’s news.

WAITING IN THE WINGS (CONTRACTS?)

I think we may see some craziness at this year’s draft. Elliotte Friedman talked about the team at No. 3—the Blue Jackets—during his 30 thoughts.

I am not certain Edmonton would be interested—Dubois, Tkachuk and Juolevi are not in the same range with Puljujarvi based on what we are told—but if the levee breaks early, maybe we will see action.

I keep hoping No. 4 overall is enough to get a legit top 4D, but you have to wonder if it happens. It would seem a more likely scenario sees the Oilers trading down to No. 7 and picking up an extra pick, then dealing their own second to Boston in order to satisfy the Chiarelli ransom. Teams may want to deal up for forwards Dubois and Tkachuk—but don’t discount Clayton Keller. I spoke to Corey Pronman yesterday, he is very high on him and an NHL team could feel the same way. It only takes one.

Mr. Friedman also talked about WHC free agents, so please click through and read all about it.

At 9:25 this morning, I will join Nielson and Fraser and offer them my offseason plan for the Oilers. Be prepared to be underwhelmed!

I have changed up the list based on Friedman’s comments, for me even if a trade of the pick occurs we may be talking about two picks for the No. 4 overall selection—and not an actual NHL player. The RW depth chart could get a complete makeover this season, with Kassian and Pakarinen joining some free-agent additions. Unlikely, but it could happen. 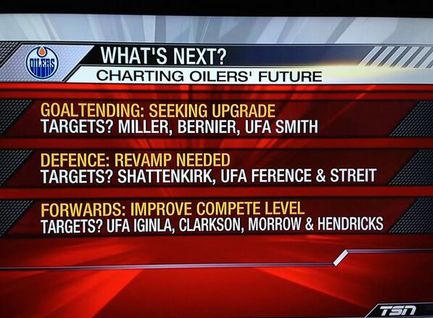