The Edmonton Oilers are poised to collect yet another ridiculous offensive talent in the 2016 draft. A run that began in 2010 with Taylor Hall—and before if you include Jordan Eberle—continues unabated barring a trade down or out of the first round’s lottery spot (this time No. 4).

Over the years, Edmonton has drafted some of the finest CHL prospects of the century. A good way to measure players is by even-strength scoring, and although we don’t have things like TOI, the points-per-game totals are informative.

We can’t really compare across years and leagues, but the numbers above indicate who had substantial talent (No. 1 through No. 9 were incredible to good) and who did not (Tobias Rieder was an excellent draft pick but his offense was not the sum of his resume).

You will read many things about Matt Tkachuk in the coming days, and he really is a great young forward. However, if we can agree that even-strength scoring is the purest gauge—and that Tkachuk plays a lot of the game—then it is very difficult to argue the London Knights winger has any clearance at all on Pierre-Luc Dubois in terms of offense. I would also challenge you to read up on Dubois, whose style is a very good fit for Edmonton. That said, it is absolutely possible Matt Tkachuk is the name Edmonton calls (I have Dubois No. 4 and Tkachuk No. 5, but the gap is small).

LeBrun: "I think the month of June is going to be a complete gong show for the amount of news that's going to be generated" from trades.

Ordinarily I disregard this kind of verbal, because every year it seems we hear about activity and then nothing rhymes. I do not think we will see 40 trades around the draft, but would not be surprised to see Edmonton involved in three deals. 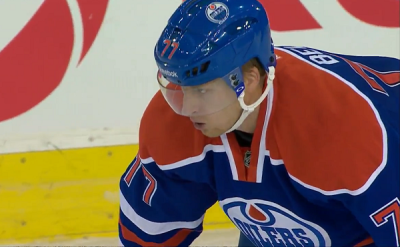 I used Christian Roatis NHL Equivalency tool (it is a grand item) but the KHL conversion appears to be liberal here. That said, Artemi Panarin’s NHLE in 2014-15 suggested 75 NHL points in 82 games—and he scored 77 NHL points in 80 games. A quick final note: Jere Sallinen, who played in the KHL last season, has an NHLE of 25 points. I will track back and discuss him in the coming days. Dustin Nelson had a good look at Euro free agents back in March. Some of the names have been signed but that remains a solid read.

Miles to go, but this does give us an idea about how much cap room there is this summer. Jon Willis has been working hard on finding good fits with that cap room and it is an area to explore as we reach the draft and free agency. Andrew Ference is not factored in, still assuming LTIR.

The author didn‘t add any Information to his profile yet.
Related Posts
Blood On The Tracks