The Edmonton Oilers simply have to get something out of their farm system, and that right soon. Leon Draisaitl spent six games in the AHL before embarking on his breakout season, but that isn’t really a victory for the development system. Many believe it is about drafting, but there is some evidence (Tobias Rieder, Erik Gustafsson, possibly Ethan Bear) the procurement department may not be the main issue. Are these kids making progress? If not, why not?

Eric Rodgers (as I mentioned last night) has done the heavy work to estimate time on ice and points per 60 for the Condors in 2015-16—just as he did for Oklahoma City the previous season. Let’s start with last season: 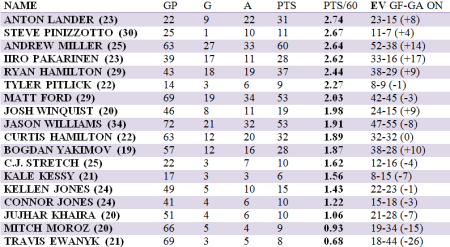 The two young forwards from 2014-15 who scored enough to get themselves into the conversation were Anton Lander and Iiro Pakarinen (Tyler Pitlick might have, but was hurt again). No forward one year ago 22 or under showed enough offense to be considered a bona fide NHL prospect (Curtis Hamilton was at 1.89, leading the group). I felt—a year ago—Bogdan Yakimov was the most promising entry-level forward in this group. 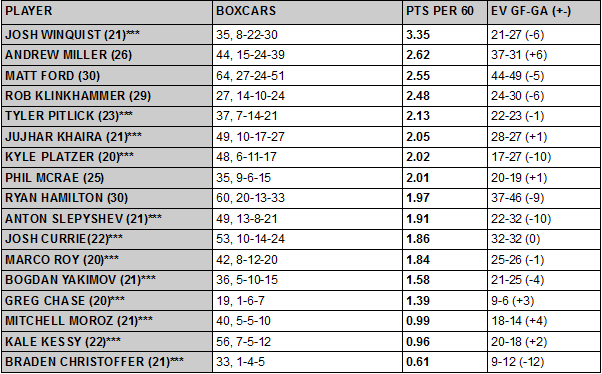 We have to talk. I was reading a lot of ‘Winquist is slow and he isn’t a center’ verbal in the comments section of this blog last night. If we were arguing about Yakimov versus Slepyshev, then playing center versus foot speed is a conversation we can have. However….

Every fall, we watch young (signed) prospects get sent out and pray to the Wichita Wind they deliver reasonable offense. Winquist did that in year one and then took a big step forward in year two and I will wager he has a better chance at an NHL career than pretty much every guy on this list (the Russians and Khaira have already had NHL time, so I count them as being ahead).

Oscar Klefbom trumpeted his arrival as an NHL-ready player in a nine game audition. The other stat that stands out from a year ago? Brandon Davidson was on for 42 GF and 32 GA at evens. Shines like a diamond, along with Klefbom. I think Oesterle and Simpson have interesting numbers, Marincin looks pedestrian here.

Jordan Oesterle and Joey Laleggia show some promise (these are not ideal measures for blue, but the GF-GA suggests they are both playing in the big parts of the game). Scott Zerr told us time and again on the Lowdown that Griffin Reinhart was not the most effective defender in Bakersfield, although coach Gerry Fleming was more complimentary. Dillon Simpson, as he has every year, showed solid growth. I don’t see a Klefbom or a Davidson here, but would suggest Oesterle, Laleggia and Simpson are showing good arrows. I would also suggest—as is the case with Yakimov among the forwards—we should hope to see big minutes for Reinhart in California this coming season.

PLAYERS FOR THE BAKERSFIELD-TO-EDMONTON SHUTTLE NEXT SEASON

Josh Winquist? He is no more Oilers property than any free agent. Peter Chiarelli is overlooking a talented young player who has found success in the AHL. This player is young enough to be considered a legit prospect, and this prospect is outperforming several miles of draft picks. Peter Chiarelli chose to sign Braden Christoffer—who was overwhelmed in his AHL time—over Josh Winquist. The bias that has plagued Edmonton’s procurement and assessment model continues unabated under the new regime. These things we know to be true.

Edmonton has several holes, but PC has $10 million to play with and if the team can add Jason Demers and another bona fide RHD, then sign a free-agent RW and a quality backup, this team—if healthy—should be able to compete for a playoff spot. Seriously.

@Steve_Dangle the Oilers could totally trade down and draft Olli Juolevi. I think Calgary'd love to jump up and take Tkachuk

I think that could happen, depending on what is made available to Edmonton. Picture if you will (sorry, I have been watching Twilight Zone recently), a draft list that has Tkachuk No. 4, Dubois No. 5 and Sergachev No. 6, but all agree the gap is very small and the defenseman might be the best choice. Trading down to add another pick or an actual player has to have some appeal, no?

I would not, and have been very clear on the reasons why. That said, Tyson Barrie would be a great addition to this team and the value lost in going from No. 4 to No. 10 is not ridiculous. I wonder if Chiarelli regrets not naming Nuge to the WC roster? Might have sewered his value.

THE OILERS AND DRAFT RE-ENTRIES