No one ever accused Oilers fans of getting over things quickly, and the Griffin Reinhart trade at last year’s draft is hanging around like a pugnacious meatloaf. Today, Bob McKenzie was on TSN 1040 Vancouver talking about the Erik Gudbranson trade—and the subject of Griffin Reinhart’s trade to Edmonton came up.

Not a word out of place, and we have talked on this blog about all of these elements. Here is what I said the day after the trade:

In terms of value, Peter Chiarelli gave up too much. Reinhart—if everything works out—projects as a second-pairing guy and the price paid was dear, too dear. Oilers fans will grind themselves into a fine white powder on this issue, I choose not to do it. Two things are absolutely true:

The Oilers paid dearly but were glad to do it in order to secure a prospect they knew very well. There’s no real way to argue it was a good deal in terms of value but the new regime believes Reinhart is worth the risk. Lose the battle, win the war. The club didn’t like the No. 4 defenseman on their list as much as Reinhart, so they pulled the trigger. They liked the tools blue, but felt a mean streak was more valuable.

The Edmonton Oilers drafted for need. This should not be news. A final note: I find it baffling the club made this move the same month they fired Stu MacGregor. It was a confusing day for the Oilers and their fans, but you’ll hear no quarrel from me about Griffin Reinhart as long as we agree not to discuss the price. Source

Here is what I said a few days after the deal:
This is basically the foundation for every conversation regarding Griffin Reinhart since draft day. The comments below will be one of three types:

I have given up on the first two groups, but would like to address the third group (we will have cookies and milk as soon as the rowdies leave). I like to hear from coaches in these situations. Here’s one now.

All of these quotes and lines are telling us one way or another that Reinhart was not ready—and may not play a substantial role on an Oilers team. Back in November (and before) I suggested Reinhart was a luxury for a team that could not afford one (and here is why).

Trading for Reinhart was an overpay, but one of the reasons for the deal (NHL-ready D) was not at all clear on the day the trade was made—this blog argued (correctly) that Darnell Nurse was farther along then, now and in the future. That was the mistake, a reflection not on the player, but rather the management. I suggest we put that aside and discuss the player.

Griffin Reinhart may have a Thomas Hickey career, and he may never become the player everyone hoped he would be on draft day. That said, it is genuinely crazy to keep hammering the young man about a trade he had nothing to do with—and it brings any hope for a reasonable online conversation to a halt with great speed.

So, can we set aside that meatloaf and have an adult conversation about Griffin Reinhart and his future? My guess is no. However, let’s try one more time. Ahem.

Small sample size, but the question is this: If the Oilers trade Darnell Nurse for a RHD, can Griffin Reinhart be regarded as a reasonable substitute—in the coming season and beyond? 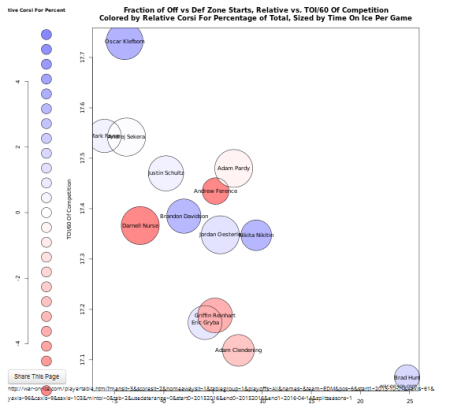 98 Responses to "ONCE MORE TO THE WOOD SHED"