I am sure we can all agree the Oilers have a pretty nice LH depth chart on defense. Oscar Klefbom, Andrej Sekera, Brandon Davidson, Darnell Nurse, Griffin Reinhart and we will end it at Jordan Oesterle. The right side? I count Mark Fayne, with Eric Gryba signable but similar to MF. We haven’t run the list of possible blue in awhile, thought I would update and review.

NUGE AT THE WORLD HOCKEY CHAMPIONSHIPS

I hope RNH makes it, believe he has earned it, but am not counting on it happening. I do think Peter Chiarelli probably hurt his trade bargaining position by keeping his center off the initial list. He may regret it, but I am glad of it. I don’t think Taylor Hall makes the big team, either. Not being critical of either man, and do believe both belong on their respective teams.

McKenzie/Stamkos: I've got to think the number he'd get on the open market is somewhere between 9.5 and 10.5 or thereabouts. #TBLightning 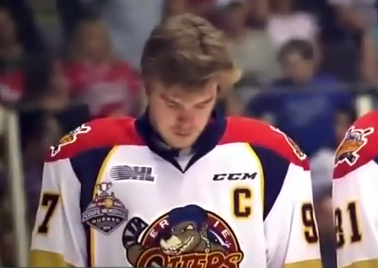 Last season, Oilers fans knew there were very good prospects coming to camp with bona fide NHLEs. If a player who is outside the NHL and has an equivalency that suggests big league talent, that is an early tell. Here are some from last year.

All the numbers from last year are here. Most of these guys played in the NHL. The point here is that if you are a defender with 20+ NHLE points (Hunt, Nurse) I think it probably indicates some offensive ability. If you are a forward with an NHLE of more than 60 points, you should probably just go ahead and purchase a home.

If the Oilers draft Matt Tkachuk—I do think it is possible (though not a lock) then Tkachuk is NHL-ready according to NHLE. Edmonton would not need him right away (LW depth chart is very good, actually) and as you can see Drake Cagguila is also a bona fide LW prospect.

The most intriguing name is Ziyat Paigin, who will not be coming over (one more year to go in the KHL). It will be interesting to see if he can duplicate his breakout season (ZP was traded back to his old team, sometimes a trade can impact performance/opportunity).

The rest of the list is interesting if not compelling. I think Jordan Oesterle and Jujhar Khaira making the list bodes well for their NHL chances in the coming year.

If the Oilers are considering Matt Tkachuk at No. 4 overall, it follows the club may decide to deal a LW at some point in the next 12 months. The current NHL depth chart is damned good, but Benoit Pouliot—an effective NHL player—may have enough value to bring solid return. The dual additions of Drake Cagguila and Matt Tkachuk might give us an indication that dealing Pouliot is in fact likely in the coming months. The question I have is this: Will that trade come this summer? It could be framed as dealing from strength to address weakness (RHD), so in that way is a traditional trade idea.

I wanted to talk for a minute about the Erik Gudbranson trade. We have chatted about the value of the trade, but for me there is huge appeal in the timing of the deal. Vancouver, for better or worse, have already addressed a big part of their summer’s work and can now move on to the next step.

Peter Chiarelli did a lot of his heavy work around the draft last season, and one suspects he will do the same this year. In adding Griffin Reinhart, Cam Talbot and Eric Gryba in one fell swoop, it allowed the team to focus on free agency and Andrej Sekera.

I wonder if the team would be wise to make a move now, today, for a RH blue. It would allow the club to address a need early and then see what is available for the next order of business. The reason I mention it? Still wondering about the Griffin Reinhart deal and the bonus item. If Peter Chiarelli knew about the cap bonus and potential impact, he would have factored in McDavid and Draisaitl and known that only two of the three (Reinhart being the third) could be on the roster.

Did he know that? No idea. I will say that in all honesty my confidence in the people surrounding him is such that it would not surprise me to learn that the Oilers table did not have that information. And that alone is cause for concern.

I would feel better if Peter Chiarelli broke up his summer into bite-sized chunks instead of relying on his staff to give him all of the important information in real time. Jmo.

Friday show, I am off next week so we will leave it all out there today! TSN1260, 10 this morning. Scheduled to appear: