The past informs the future. Peter Chiarelli doesn’t tell the truth and the whole truth, but he does pass along clues. Two examples from one year ago:

ON TRADING PICKS IN 2015 DRAFT

Chiarelli was all over this last year, adding Cam Talbot, Griffin Reinhart and Eric Gryba on draft weekend. The kicker? Edmonton had a pretty damned good draft despite offloading 100 picks.

It sounds to me as though the Oilers feel they could come out of this year’s draft with some outstanding talent in the first two selections—say, Matt Tkachuk and Cam Dineen—but the first pick appears to be in play, at least a little.

I think the plan might be to: Trade No. 4 plus something (GR? Speeds mentioned that yesterday) for No. 10 and Tyson Barrie—and then signing Jason Demers. Darnell Nurse might also be a piece in play in this scenario—Nurse fans should be prepared for that outcome. Incredibly, based on Colorado verbal, Barrie might qualify in the distressed trade category.

Clear as mud, right? I think there is a path provided by PC here, and what he needs is a partner. A partner at No. 6-10, and that team may in fact make itself known between now and draft day. Good guesses are Arizona, Buffalo, Montreal and Colorado (Elliotte Friedman has identified all four iirc). Trade down, for picks, or (better yet) picks and players.

I have been reading Eric Rodgers fine work on the Bakersfield Condors, and have reached his TOI estimates for defensemen. It is also true that AHL Prospects Stats does TOI estimates—and this gives us a chance to cross reference. Now, the idea isn’t to expose errors or discount this work, but rather to see ‘the range’ we are dealing with in estimates. I will post Rodgers (AHLP) for each defender.

All of the estimates are within two minutes. That seems pretty good to me, what are your thoughts? Brad Hunt’s totals seem low in both estimates, and I will admit to being surprised by the Nurse total—but other than that, seems reasonable. I find it very interesting that Jordan Oesterle posted those kinds of minutes—the coach clearly relied on him in his second season of pro hockey.

IMPACT OF PRE-SEASON PERFORMANCE ON ROOKIES

I want to post this here (for something that will come later), basically rookie forwards scoring in pre-season the last two years, fall 2014 and fall 2015.

This gives us an idea about Peter Chiarelli’s vision and how the rubber hit the road from the day he took over (additions in black bold). 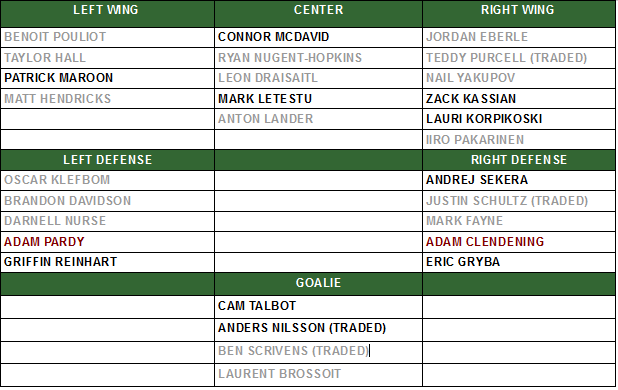 The men brought in to play forward positions are a decent lot, in-season additions (Maroon, Kassian) are both more Chiarelli in style and were more effective in fact. I count Mark Letestu as being effective (he was forced into a more prominent position that was advisable), leaving only Korpikoski as an overall negative. I think we can agree McDavid helped a little.

Defense was a bigger mess and we can agree not all of the solutions rhymed. I will count Andre Sekera as a positive, Eric Gryba served as a third pairing option and a guy like Adam Pardy showed reasonably well in small sample sizes. I believe Chiarelli improved the goaltending—not to Hasek levels—and gave the team a better chance to win than recent options in that area.

Is Peter Chiarelli a poor manager, or a manager who had a gigantic job that needed more than one summer to turn around? The next month is going to be very interesting. Adding Jason Demers is my No. 1 move for this team. What is yours?

148 Responses to "DAYS OF FUTURE PASSED"