If you are an Edmonton Oilers fan, this is an exciting and dangerous time. Exciting, because there are good defensemen headed to this northern outpost. They will guard the rear, move the puck up expertly and allow smiling to occur deep into the winter. Dangerous, because those defenders are going to come at a cost.

Is there something afoot? Taylor Hall for Hampus Lindholm? Lindholm is a fabulous player, but would Chiarelli pull the trigger straight up? Interesting scenario.

No doubt Lindholm is a stud, and he does have three complete seasons in the NHL. That gives us a legit sample size, plus he appears to have spiked this past season. All of his defensive partners are better with him than without. I will look deeper into Lindholm (and Ryan McDonagh) as days go down. 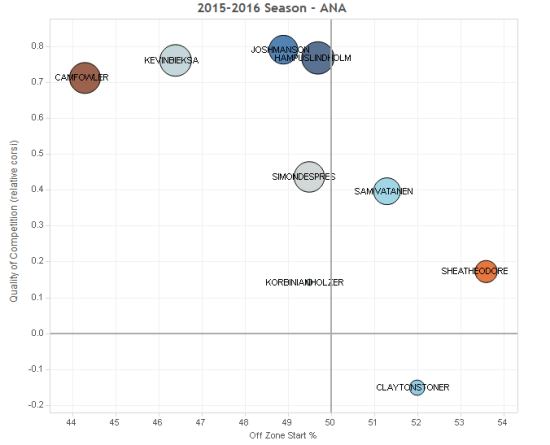 He is in an excellent spot for such a fine bubble. Hampus Lindholm is a very fine young defenseman. Would you trade Taylor Hall for him? I said yesterday Anaheim would have to add a sweetener, but how much? Or would they have to add anything at all? Trading for defensemen scares the hell out of me at this kind of price. Injury can derail a good defenseman in a heartbeat. That said, he is a perfect fit. I would make the trade but would want a sweetener and the young man would have to be signed before the deal gets done.

I hate to ruin the draft for you, but the Oilers are going to select Matt Tkachuk at No. 4 overall. It is an understandable pick, but I would take PLD or trade the selection and move down for Mikhail Sergachev, Olli Juolevi and Jakob Chychrun. My phone is on, they do not call me.

I have been spending a lot of time with Prospect-Stats, specifically their Equal Strength Primary Point-per-game measure. It gives a very interesting view of the draft. Here are the 2016 eligibles in the WHL via EV primary PPG (points-per-game):

The WHL does not have a great crop of forwards this season. Jake Bean, a defender, posted .294 per 60 at even strength, a little less than Caleb Jones. Interesting information. Is Dillon Dube the best forward from the WHL this season? I have Tyler Benson as the top F in the WHL—a pretty good bet if he can stay healthy. While I am emptying the honesty chamber, bet real money Edmonton drives hard to get him with their second selection. Lets try the OHL:

Top D in the OHL is Cam Dineen (.338) I think he is wildly underrated. Question: Is Matt Tkachuk the best offensive forward among the 2016 eligibles from the OHL? And why don’t people talk more about Alex DeBrincat? Now the Q.

Top D is Luke Green (.361) and he is probably badly underrated. Look at PLD! The man had a fine year. I would take him at No. 4 overall.

Years of watching drafts with the Oilers involved informs (and harms) a person. So far this spring, I have done a bunch of mock drafts looking for real value in every spot. Today, I mock the draft the way Edmonton’s board has set up in the past and probably will this season.

That’s how Oilers drafts go. The team will go with the flow in Round 1, add the defenseman in Round 2, get the goalie because it is in the playbook. Then the team will settle in for two or three fine selections, followed by what I hope are inspired picks late. Chiarelli’s Oilers did that last season, one more time would be nice.

Big if true! Trumpets! This could work out for the Oilers, as some teams will be entering something close to madness this summer.

The club should be able to add two quality defensemen to this group and still have enough to grab a good backup goalie and a RHC. Note: I am assuming Andrew Ference on LTIR, something that may not happen due to the next item on today’s agenda.

This increases the chances of Ference being bought out—but the NHL may cast a dim view with the new rule in place. Sticky wicket, as the British say. Edmonton would need to protect Cam Talbot, Andrej Sekera and Andrew Ference (if not bought out), but it would also have tremendous impact elsewhere. Now, if the NHL really wants to tighten the screws, there should be a trade freeze and rosters should lie dormant from the 2017 trade deadline until expansion draft. That might actually cause ulcers—I challenge, no demand, the NHL does it. Hehe. No chancey, Mr. Whalen.

Benoit Pouliot would appear to be on the outside looking in, or you may want to delete Brandon Davidson (I would keep him). Overall, I believe this would be a net positive for the Oilers, but the ‘sky is falling’ group will no doubt light torches before tea time. I have tried, and will continue to, caution patience in regard to the draft and draft rules. People, the NHL is not a thoughtful and measured league. The rules can change in seconds, based on a red fire truck passing by the window of a single owner. Seriously. Your hockey fantasy league has more restraint, more respect for the rules, more sensitivity to howls of farce. Honest.

144 Responses to "SEND IN THE CLOWNS"