How do you offload a former No. 1 overall pick who has floundered as a hockey player and still get value? Turns out, it is really damned difficult.

A rumor flying around has Travis Sanheim from the Flyers in play, it is an Eklund rumor and of course people have opinions about him. That said, I do think that the Philadelphia trade above offers some guidance for us as we try to estimate a deal for Nail Yakupov. Daigle was dealt to the Flyers for another high pick who struggled, plus something (that turned into something else). 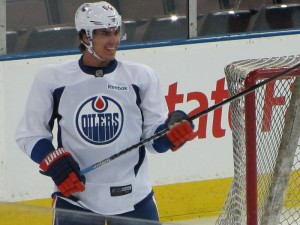 Yakupov’s resume is not a fun read. Once you get past the black ink (No. 1 overall) there are rows and rows of pedestrian measures and he looks for all the world like a guy who will be in the KHL next summer. He has not progressed and his strengths remain dormant (mostly) because the Oilers mishandled him. What can PC get for Yak? If we go back to 2010, and search for ‘high picks who are struggling’ or ‘players who may be buried by exceptional depth’, we get:

I think we would be wise to assume a somewhat fuzzy resume is coming back, and—as the previous No. 1 deals above show—a package that obscures actual value of said former No. 1. Something like Sanheim and a pick for Yakupov and a pick. Seems about right.

WHERE HAVE ALL THE BLUE MEN GONE?

Matt Dolloff from CBS Boston gathered up all of the news on defensemen over the last while—Alex Goligoski traded to Arizona (fabulous move by Coyotes), Tyson Barrie off the market and Jacob Trouba apparently staying put. He also ties the Oilers to Kevin Shattenkirk, and I have read this a few times. I am putting Shattenkirk on this list, despite the fact we all believe it is a distant bell.

A cautionary note: Some of the names crossed off could easily appear again. Travis Hamonic may well be in play despite the Garth Snow verbal. We wait. And worry a little, but I am pleased to see that  (it appears) Peter Chiarelli is unwilling to trade terrific value for need and take less than 100 cents on the dollar.

SAIL ON DOWN THE LINE

I enjoyed watching him, he was kind of like a utility outfielder. He didn’t have enough bat for the NHL, but was splendid in the AHL and I expect he will have success in the KHL. Wish him well, the man can skate like the wind.

Every Generation Throws a Hero Up the Pop Charts