We are probably close to something (Yak deal?) involving the Oilers, but the truth is the entire Canadian West has been dormant so far this week. Winnipeg signed a goalie, Edmonton signed a couple of fringe NHLers, Calgary hired a coach and Vancouver let their GM be interviewed. Entertaining sure, but not substantial. What do we know, for sure?

Wait, Dreger said on TSN that the potential cost of Trouba for EDM would be Nurse? You do that deal all day if you're EDM, don't you?

I deleted Nurse and Leon Draisaitl from my Chiarelli list awhile back, based on what the leaves were saying. I think the McDavid cluster could see an addition—Matt Tkachuk and others—but PC borrowed heavily last year in gathering up Cam Talbot. As much sense as this trade makes, Trouba is three years in to his pro career and in search of real money. If you are truly incredulous about reasons why Edmonton would hesitate (suspect they make that deal), cost and control are the only arguments that hold any water. They could sign Jason Demers in free agency, keep Nurse, and still spend less than what Trouba is apparently asking. I would make the trade for Trouba, though, I do not see it as a major risk. Trouba has struggled, but defensemen get hurt, fall off, then recover. It would be a good bet.

Stauffer suggests if Demers asks for $5.5 mil from EDM they could pass.

I get that, but it is also true the absence of alternatives clears the mind. When the trades die down and the options dry up, I am sure the sweat begins to run into some fairly desperate places. Aiming higher via trade makes complete sense, but Demers could be in play on July 1 for PC.

Can't help but think NJD and Oilers could be a fit. Severson a RS D with big upside, Devils desperate for offence, plenty of cap space.

Absolutely makes sense and one of the top names on my list. The great thing about Severson is that he can play up the lineup a little (second pairing) and he has plenty of good years ahead. Yes, please. 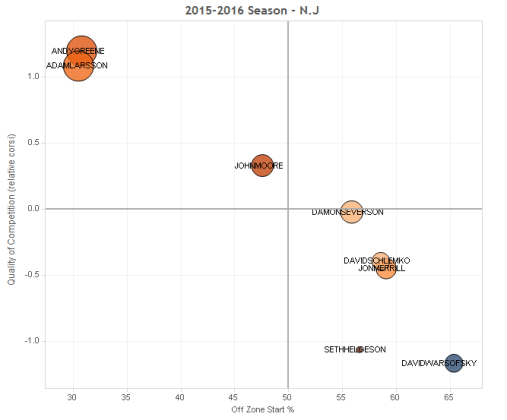 I like the bet very much. If the Oilers could grab Demers and Severson this summer, you might get your wish (Fayne dealt). I still think the chances that Edmonton’s third pair has two lefties is fairly high.

I wonder what a team would have to offer Edmonton for No. 4. Sure, trading down gets you (possibly) one of Sergachev, Juolevi or Chychrun, but Edmonton has a lot of young LH blue. It would be tough to trade out, I would think. It might be best to deal down to No. 8, then again to No. 12 and then take Charlie McAvoy or Dante Fabbro—both RHD. I know everyone and their Mother are telling you one defenseman is better than the other one, but I will be damned if I believe there is a helluva lot of difference between the top six blue this time.

I will once again list my three teams that make sense for trade: Islanders, Flyers and Ducks. I know those teams do not have picks nearby, but the Ducks have two picks now and that may mean they can move up. Note: No, I am not talking about trading the winger, this is mostly a trade down scenario—with a defensive kicker. Edmonton needs to add some youth on defense (RH), I wonder if someone like Brandon Montour could be available in a trade involving picks. Brandon Montour is a helluva prospect, folks.

For fans concerned about Ethan Bear. Discussions are on-going and positive. Don't see an issue here

Music! That 2015 draft could produce some real talent, beyond the obvious. Miles of track to go, but signing these kids after successful seasons is just good business. Bear is one of the precious few RH in the system, along with John Marino. Edmonton is extremely likely to grab one of these men at the draft: