All spring, we talked about needs, possible assets out and adding help on defense. We had it surrounded (Taylor Hall was No. 4 on my assets list) but it was so very difficult to identify the actual assets out—probably because it depended on the ask. At the very beginning, we agreed PC would make his list, find out who was out there, and then check down to what he considered acceptable. As it turned out, that is exactly what happened, meaning we predicted it—and it still produced shock and argh.

This morning, I think we can safely say one thing: We are witnessing the increased value, in real time, of actual NHL right-handed defensemen.

Adam Larsson is a good young NHL RHD. There are good things in his resume, and he addresses a major need. I am looking forward to seeing him in an Oilers uniform this fall. Some positives from the Todd Cordell post from yesterday:

I am pleased Chiarelli checked off the No. 1 need on the list, but of course the payment was shocking. Make no mistake, Adam Larsson is a good NHL defender who is young, under a good contract and likely to help beginning this fall. The list grew from four to five because of the Hall deal.

Two tasks have been addressed and that is progress. I imagine he will run through several in the next few days—although getting the second NHL blue seems a difficult task. We could see a Lauri Korpikoski buyout today, although it is far from a certainty. I wonder if the Oilers will consider Korpikoski as a potential mentor and guide for Jesse Puljujarvi this coming season (Iiro Pakarinen also available at the NHL level, Jere Sallinen and Eetu Laurikainen in Bakersfield).

In the end, I had him at No. 4, but in truth the $6 million dollar men were apparently all in play—and could still be in play, depending on how aggressive PC plans to get this summer. Trading Hall means unicorn talk will have to wait, depending on how quickly Jesse Puljujarvi can establish himself, the healthy of Ryan Nugent-Hopkins and the addition of Milan Lucic in free agency.

One suspects the Larsson acquisition is the big play of summer, along with Milan Lucic being signed tomorrow. After that, grab an inexpensive defensive option, a backup goalie and hit cottage country by American Independence Day. That second defensive option could prove important, hope the team chooses well. Would they consider another trade? I assume Jason Demers is not part of Edmonton’s future, based on the Larsson trade. Do you agree?

Dreger/Lucic: "I'd be absolutely shocked if he didn't sign a contract w/ the Edmonton #Oilers on Friday."

I cannot believe the Oilers would have traded Hall without knowing Lucic was a lock to make the team. Perhaps I have misread the situation. If Lucic does not arrive tomorrow, we will be having a long conversation about the offense this winter. 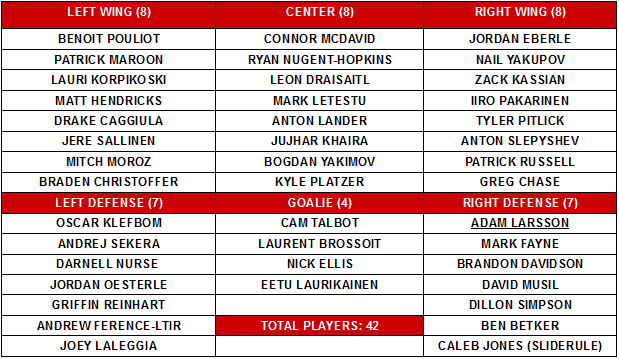 USE YOUR BRAIN FOR MORE THAN A HAT RACK

I think we can all agree that Peter Chiarelli overpaid for Adam Larsson. That said, I hope we can move past the trade and talk about Larsson and his considerable skills. You may feel that is unkind, but for me spending more time discussing the trade means we are dwelling on things we cannot control—and basically wallowing in our own misery. In my life, I have learned it is not productive to spend a lot of time in that place. You may feel it harsh, but that will be the mindset of this blog moving forward. It is sad. It is done. We move on.