The Bruinization of the Edmonton Oilers continued today—in a very big way. Peter Chiarelli signed one of his trusted soldiers—a giant from the Vancouver docks—the two men welded together by the 2011 Stanley.

I have watched enough sports to see that teams can win championships more than one way—Whitey Herzog and Earl Weaver won in the same era and in different ways—and we are approaching a point where the ‘Bruins West’ are almost complete. Does this big team have enough skill? I suspect PC is not done yet, but from here it looks a little lean on RHD and RW.

Chiarelli says they are out on Demers. Still in touch with Gryba but have some other irons in fire so will circle back to Gryba camp #Oilers

The Oilers signed a backup goalie (Jonas Gustavsson) and yet another LHD (Mark Fraser) as smaller moves in free agency. Both moves are somewhat curious, but the truth is neither man is likely to have a massive impact on the year ahead. I would mark Gustavsson as slightly better than Anders Nilsson—but Laurent Brossoit should be able to win the backup job at some point in the coming season. 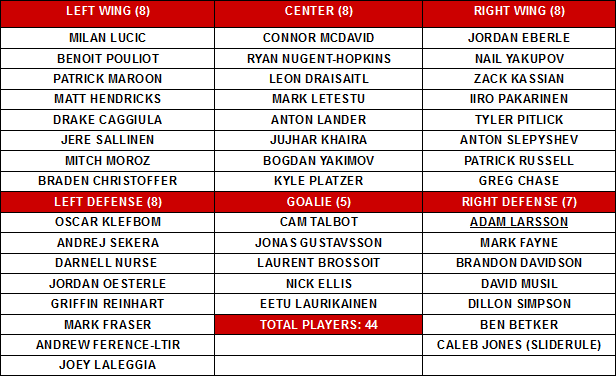 If they asked me (they won’t) I would suggest:

Bah! That is impossible to deal with, please make it balance! And speaking of balance, Peter Chiarelli has a chance to get that so very difficult job done this summer. I will never agree with his trading of Taylor Hall, but it did put him within spitting distance of running a balanced roster this fall. If he can trade for Tyson Barrie, replace my favorite Oiler with a RHC who can play a two-way game, then we can talk about the future, a balanced team, and the playoffs. Peter Chiarelli is building this team in his own image—the Connor McDavid Oilers officially look like the Bruins team PC began building a decade ago. It would have been easier—and better—if the GM had adapted his style to the brilliant roster pieces he was gifted, but that was not to be, and we are here.

207 Responses to "THERE I STAND, BENEATH THE MARQUEE MOON"