This morning, I think we should establish reasonable expectations for Jesse Puljujarvi. He is 18 (birthday May 7) and coming off brilliant tournaments against kids his own age, plus a season as a regular in the Finnish pro league (Sm-Liiga). I think, going in, that the Oilers should bring him to camp as a probable NHL option, but with the Sm-Liiga or AHL as possibilities—even for 20 games. How does JP compare to other Finnish youngsters after their 17-year old seasons? Below are points-per-game totals in the Sm-Liiga at 17, plus totals in the year following:

I understand this is over many years and certainly without TOI we are miles from really knowing. That said the Sm-Liiga is tellings us Puljujarvu is not Barkov offensively, and Barkov had 24 points in 54 games as a rookie. Counting on Puljujarvi as a significant offensive player next season is risky, in my opinion. He may develop that way, but counting on him in a season Peter Chiarelli needs to go well? He might be productive on a third line that sees the soft parade—say, with Leon and Maroon—but a feature role on the McDavid line feels extremely early from here.

Milan Lucic differs in many ways from Taylor Hall, and one of those differences is shots on goal. Lucic shot 124 times in 81 games (1.53 per game) and at even strength 5.09 shots per 60. His playing style helps in the offensive zone, but he is not the dominant shooter on his line. The fabulous blog The Energy Line (Corey Sznajder) tracked some playoff games by the Kings and produced a wonderful graph to show Lucic as primarily a passer: 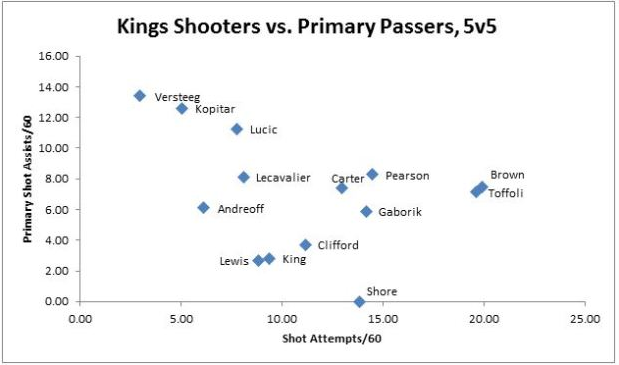 I think that points us to the need for a shooter on RW. Who are the best shooters for Edmonton? Well, let’s look at two categories: shots per 60 and attempted shots per game (via hockey-reference):

Puljujarvi is so young, I would hope the Oilers put him in a protected role, as mentioned above. Based on anecdotal evidence—Revolved also supplied us with info that (among other things) tells us JP delivered 6.93 equal-strength shots per 60—he could be a marksman for a scoring line. The question is when? I hope the Oilers don’t push him. Based on the numbers above, I think Nail Yakupov may have a seam here, even a little one, to get a push this fall. 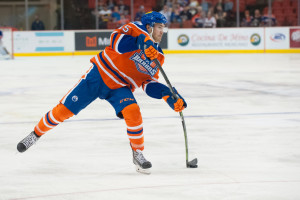 I imagine the Oilers will see several rookies play a substantial amount this year.

There are reasons to believe there is a deal here, with Nuge and Barrie the prominent names. Could this deal get bigger? We wait, but today might get interesting.

A great new resource for you to bookmark: Hockey Relativity. Scoring rates and estimated scoring rates allow us a very interesting view into these young prospects. Among the interesting items: Bear (1.32) and Jones (1.28) are basically equal at even-strength offense. WheatnOil wrote about this, and a reflection of that 2015 draft’s quality. Also, Tyler Benson is No. 1 among 17 year old WHL forwards in points per 60—we talked about this too, but nice to get a confirm from another source. The IPP category is revealing as well. Also discussed, and now confirmed, Markus Niemelainen is a more productive player offensively than Logan Stanley. Of course, this doesn’t address the defensive side of these prospects but it is interesting.