There is talk of a trade for Tyson Barrie or Cam Fowler, but we can probably begin the process of sussing out the Oilers roster for 2016-17. The nature of this year’s 50-man list is that we are going to see (I believe) a lot of roster shuffling at the bottom end—and of course injuries will have their say. Let’s have a look at the current situation.

This begins the RE series and of course the Oilers will make a blockbuster trade later today. The opening night roster (by my estimation) will look like this:

In a month or so #Oilers Klefbom will travel to Montreal (and Bauer) to get a custom made ice skate that will protect his foot.

Klefbom is a vital part of the Oilers defense over the next several years, so this has to work out for the organization. The young defender is by far the most promising among a group of high picks that include Darnell Nurse and Griffin Reinhart.

This is a dandy player card, showing Oscar useful at both ends of the ice. His offensive ability was obscured early in his career, his boxcars improving as he rose up the higher depth charts at the pro level. That is unusual, especially for a blue. A healthy Klefbom goes a long way to helping this team rise in the standings. 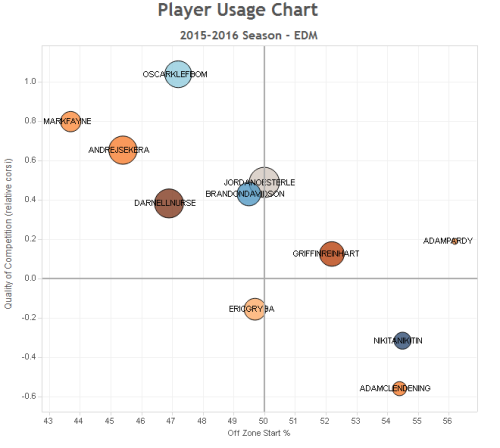 The Vollman shows that Klefbom is already in the difficult part of the graph and possesses a nice blue bubble. It is so Oiler that he is the one to come down with an injury that is both freak and slightly scary in possible long-term impact (foot injuries, if they are recurring, can derail a career). It is encouraging that the young man skated in June here in Edmonton and felt good, and the idea of getting a more comfortable boot is a good idea. Safe to say we will all feel better when he dresses for 75 games or more in the coming year.

The #Oilers salary cap situation is more challenging than it seems: https://t.co/Ty6YjYqxCt | pic.twitter.com/R2NeCjiLLo

This is a must read, and talks about (with more clarity and evidence) the difficulty Griffin Reinhart is going to have making this team. I wonder if the cap worry is enough in and of itself for Edmonton to consider dealing GR? Perhaps the team thinks it wise to keep him for the coming expansion draft, and of course he could be recalled later in the year when cap bonuses are no longer in reach.

Chiarelli knew he'd get hammered. "Whatever you do, social media is going to criticize you." #Oilers #NJDevils https://t.co/qpeibKdxma

I think this is generally untrue. Peter Chiarelli has received positive reviews on moves that seemed positive on first blush (Talbot trade, Andrej Sekera signing, Maroon trade, Lucic signing—even things that are a stretch, like not trading up for Puljujarvi—are received positively), and has been hammered soundly on things that were net negative (Reinhart trade, Korpikoski trade, Hall trade). There is so much commentary that you could probably find media outside those lines, but most things I have read about these things made sense at the time.

As I said yesterday on the Lowdown, I can’t tell you the Hall trade was a good deal just to make you feel better. I can tell you that Larsson looks like a substantial addition to the blue line. and that I cannot foresee a time in the future where pundits agree that the Oilers won this deal (beyond an injury, et cetera). Peter Chiarelli got ripped because the trade was not full value. At some level, it is the media’s job to hold him to account, and I think that has been done.

One true thing: The defense needed to be fixed and I do think Larsson is a strong addition and a big part of the solution.

Twelve teams were after Lucic.

Milan Lucic is a very productive possession player, as shown via the wowys at Stats.HockeyAnalysis.com. The same site shows he is ranked No. 40 in 5×5 points-per-60 among the NHL among forwards with 400 or more minutes at even strength. Lucic ranks No. 5 among NHL LWs in even-strength points (47), just six behind Taylor Hall.

Lucic does not score 30 goals a year (he has done it once) and he does not shoot the puck 300 times in a season. He is an unusual player, an enforcer with soft hands, and because of it has averaged 30 assists per 82 games in his career. That is a big part of his value.

There are things to criticize about the Lucic deal—it is too long, he plays a rugged style and that often means physical breakdown around age 30—but Milan Lucic is a unique player—because he brings 50-point seasons to a policeman’s game.