Drake Caggiula has a terrific resume. His cap hit ($1.35 million, with $425,000 in performance bonuses) for the next two years would make him an exceptional value contract should he make the team. His NHL equivalency (22-22-44) makes him a bona fide NHL prospect from the opening whistle of training camp. If the Edmonton Oilers are to contend for the playoffs at any time in the next two seasons, value contracts will play a part. Patrick Maroon ($1.5 million), Brandon Davidson ($1.425 million) and Connor McDavid will be value deals, Edmonton needs more.

Offense is the hardest thing to do, and this young man has it. Some may think there is no chance for Caggiula to make the NHL this fall, but last year’s crew who competed in the Billy Moores game had a pro and NHL story to tell. Here is a sample from a year ago:

We are seeing the same thing this summer as last, some solutions appear adequate to good, others are unlikely to solve the problem. Is Jonas Gustavsson this year’s Lauri Korpikoski? I think there is a very real chance Laurent Brossoit wins the backup job sometime during the 2015-16 season.

One of the things Edmonton’s management is no doubt counting on is better health for next season. In a way, it is a trump card for next year, allowing (in my opinion) a summer of change before the roster is locked and loaded for the next two years (and the end of the McDavid entry-level deal). I received a significant amount of push back on the Lowdown yesterday when I said this Oilers team may have been as good or better by keeping Hall and simply signing Jason Demers—but I think that is absolutely the case. Suspect we have all had enough of what has become a toxic debate, but that doesn’t mean we cannot have a lively debate about the possibilities with Hall/Demers.

The Pisani should probably be on the top list, especially if PC chooses to keep his centers three. Most of the secondary list has been crossed off and in some cases very well. The goaltending remains a concern, up and down.

The hope at this point (for me) is that the futures portion of this list (2017 picks, LHD, et cetera) would be the big part of assets gone or going. If Peter Chiarelli can find a Tyson Barrie—and there are some options still out there—without giving up RNH or higher, then I think we can reasonably discuss a team that is heading toward balance. That would be a significant accomplishment, despite the incredible cost. 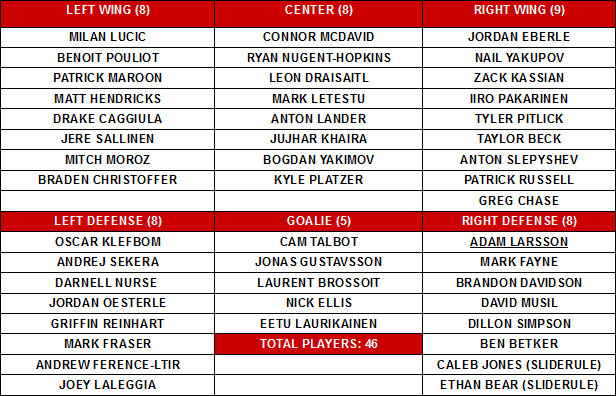 DOWN THE ROAD APIECE

109 Responses to "THE SOFT PARADE"