If no changes come, the Edmonton Oilers opening night lineup should be more balanced than one year ago. That isn’t the same as saying the trades and free-agent additions guarantee a playoff spot—and does not excuse the price on Larsson—but balance is stronger now than a year ago.

I still believe we will see a James Wisniewski (or higher) added later this summer, but this is my projection for the RE. The team remains short in several areas, including a puck mover on D and a two-way RW/C—but there is time and those things may be addressed.

Cam Fowler may be the best puck mover available, and Edmonton may pursue him because of need. Acquiring a righty would make the roster more balanced while also allowing Klefbom, Sekera and possibly even Davidson to play on their natural side.

The Bakersfield Condors should be a good hockey club, if the Edmonton Oilers can manage to keep the kids on the farm. They tried a year ago, with both Leon Draisaitl and Darnell Nurse on the opening night roster. This time, the possible impact AHLers include Drake Caggiula, Anton Slepyshev, Jujhar Khaira, Griffin Reinhart and Laurent Brossoit. 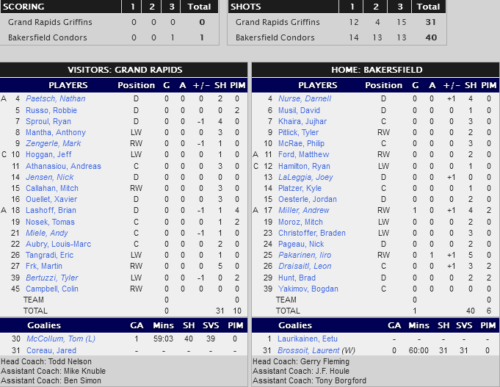 This is a pretty solid lineup for an AHL team. Top prospects included Leon Draisaitl, Darnell Nurse, Jujhar Khaira, Iiro Pakarinen, Bogdan Yakimov and Laurent Brossoit, among others. This season, the club should have some terrific additions, including some incoming forwards (ranked by NHLE):

This is the third year I have looked at the developing talent on the farm for Detroit and Edmonton. Here are my conclusions from each of the last two years:

Eight players at the pro level, and I think you can reasonably argue six of them took substantial forward steps. Two others, Ouellett and Nosek, are gaining experience and remain legit prospects.

Eleven players, but far fewer who had positive arrows compared to Grand Rapids. I would say the best arrows of the Edmonton group (Laurent Brossoit, Jordan Oesterle and Jujhar Khaira) are all at least slightly behind the Big 6 of Grand Rapids. If you are an Oilers fan, the hope (I think) should be that Griffin Reinhart, Bogdan Yakimov and Anton Slepyshev spike in 2016-17.

Detroit’s prospects look stronger by some margin. If there was an expansion draft, I would rank the players thusly:

A fun show with great guests, 10 this morning on TSN1260. Scheduled to appear:

Bakersfield Condors 2019-20: Game One at home to San Diego Gulls