Keith Gretzky will have no problems finding areas to work on this winter, and my hope is we see him force a change in handling of AHL rookies. For many seasons, the Oilers organization has used that valuable year as a holding chamber, allowing the young player into about one half of league games with meager minutes. It runs counter with successful minor league organizations, and my hope is Gretzky fixes it.

Keith Gretzky won’t ask me, but here are my suggestions for him:

There is an asterisk for that final season, as Brodziak played on a combined team (Oilers-Penguins) that included more than the usual number of talented prospects. That said, Brodziak had a strong year and was one of the best prospects (maybe the best) to come from that team.

Khaira got the ‘Oiler treatment’ in year one, I hope Keith Gretzky changes that ridiculous practice on day 1. If you are bringing in rookie pro’s, play them! Khaira’s year two is in the range with Brodziak, of course this is comparing two seasons over one decade apart so that has to be factored in. Brodziak’s team at 21 scored 238 goals, Khaira’s team scored 211 goals.

Platzer performed pretty well in spite of the Denver boot that is the Oilers. I am fairly encouraged by his season, and hope he gets a push in year two. 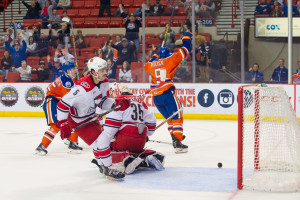 For many years now, the Oilers have promoted AHL veterans and graduating college kids (like Mark Arcobello) while slow-playing the drafted kids who have turned pro. Believe me, it is a thing. I do not blame the coaching staffs—their job is to develop but also deliver a competitive team—but Keith Gretzky would do himself an enormous favor by changing the culture that slow plays the new pro players. That is not to say all of the issues that plague Edmonton’s draft and development system is on this practice. Here is what I wrote in the early months of Curtis Hamilton’s pro career in OKC:

Hamilton was hurt shortly after that point and really injury was his story as an Oilers prospect. That said, this is one example over many years—and there is evidence Edmonton has kept youngsters waiting in the pressbox at 20. That first year is an extremely important one for development, and the Oilers are not playing it smart.

Don’t even think about it. The Jets are not going to give up Trouba—who will be expensive from now through well into next decade—for anything less than too much. You may be thinking Darnell Nurse or Griffin Reinhart, but I think it would take Leon or Oscar—or more. Winnipeg’s idea of a fair deal has the Buffalo Sabres licking their wounds all day, every day.

Jones made the first Cuts for the U.S. Roster for World Juniors. Although this is a somewhat arbitrary line in the sand, making it this far—based on his draft number—is another indication that Jones is emerging as a substantial prospect. We need to dial back enthusiasm—but this is a good arrow.

The Edmonton Oilers will need a lot of help from their prospects this winter, and we could see some surprises among the group of youngsters bubbling under. I define prospects as players with less than 50 NHL games under their belt, meaning this is the group Todd McLellan will choose from for 2016-17:

I believe the first seven names above will play in the NHL, some of them for the entire year? After that? Edmonton badly needs some of those names after No. 7 to deliver this coming season. Edmonton really needs one of their minor leaguers to magically turn into Kyle Brodziak. The problem? Very few AHL players are trending in a good way, partly because the Oilers do not give their minor league rookies playing time (Kyle Platzer being the most recent example).

A fun morning, with Bruce McCurdy from the Cult of Hockey and Scott Cullen from TSN (plus other guests as the morning moves). 10-noon, TSN1260. Text 10-1260, Lowetide on twitter. Gretzky talk on the way!