Over time, a management team will develop enough of a past in terms of player evaluation for us to make decisions on them. Peter Chiarelli has already made two famous deals that we will be talking about for a long time—and in a real way, we are already beyond the point of no return. It is unlikely this GM can recover his reputation after the Reinhart and Hall deals. For those of us still keeping track, there are other decisions being made that give us insight into the current GM and his support staff. Example: Marco Roy. Roy was drafted in 2013, an analytics pick who fit a model (hello, Michael Parkatti!) Edmonton believed would deliver value in the late second round. Roy did not develop offensively as hoped, went unsigned by the team, and spent his first pro season on an AHL contract with the Bakersfield Condors.

Without going too far into his junior career, Roy’s lack of offensive development in his final two seasons of junior would probably have hurt him in a big way. That final Remparts team in 2014-15 was very strong, Roy finishing sixth in team scoring during the regular year, a tie for ninth in the playoffs. That second year involved some injury issues (wrist, others) and impacted his progress—we should always remember those injuries but I never can—and may have contributed to his not receiving an NHL deal. 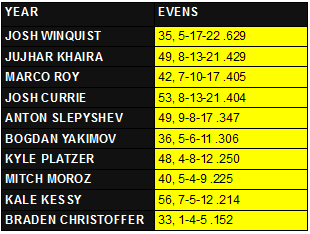 These are basically the forwards on their entry-level deals, or those who should be but have not been signed by the Oilers. Now, I am going to let you in on a little secret. I do not know the number, and don’t have the time to find it, but there is a point-per-game total somewhere in there where you can basically NP (no prospect) a player. It sounds harsh, and teams don’t do it until the three year mark (after entry level), but at least three of the players on this list are below it—pretty sure.

They traded Rieder for Kessy, and they signed Braden Christoffer, Mitch Moroz, Kyle Platzer, Bogdan Yakimov, Anton Slepyshev. They drafted Marco Roy in the second round, did not sign him to an NHL contract, but played him enough on an AHL deal so he could trump all the signed guys except Jujhar Khaira (who was a year older)? And then didn’t sign him again?

Edmonton may be learning some lessons, as the club’s most recent second and third rounders from the CHL are better offensive prospects. Here are the last five picks (forwards) in those rounds and their points-per-game total in their draft seasons:

Edmonton signed all of these men, save Roy (and Benson who will likely be signed in the next 18 months). Based on some of the names that currently reside on the Oilers 50-man list, it is extremely curious Marco Roy’s name remains off the list. 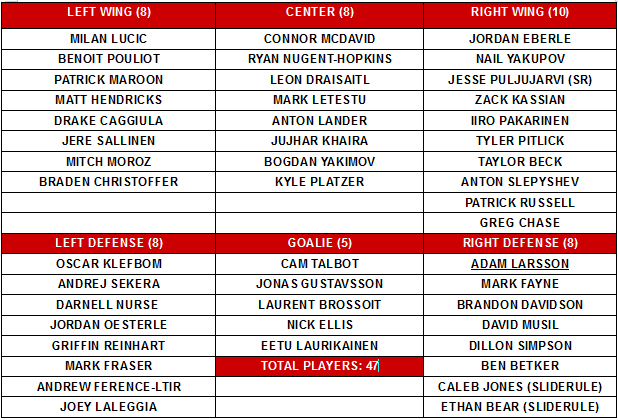 Listened to oilers now Today, Stauffer away but did a hit and said that if Wizniewski does not sign a contract he will be invited to a PTO

I did not hear the interview but trust Heather got it right. We have looked a Wisniewski at length on this blog, mostly staring at his last healthy season.

Foot speed was an issue before the injury, it is most certainly going to be one now. Wisniewski basically missed an entire year of hockey as an older player, so it is extremely likely he will be well behind the rest as training camp opens. I like the idea of a PTO, hope the Oilers are aiming higher—and would be well pleased if they get Wisniewski on a PTO and trade for a quality RHD. Wisniewski as a 7D has some appeal.

I was on holidays. I got a message from Too Tall Matthews (he was John Short’s producer, helluva fun guy and an excellent producer) saying get the hell down to Molson House but I couldn’t make it in time (I was in Sylvan Lake). My initial reaction was shock, but I will be honest my second thought was ‘well, they can win anyway’ and in fact Edmonton would win in 1990. I did not like Jimmy Carson as the centerpiece to the deal, and suspect it was not an enjoyable season (1988-89, plus four games in 1989-90) for him in Edmonton.

Martin Gelinas had just been drafted and seemed a distant bell. The three draft picks to come (Jason Miller, Martin Rucinsky and Nick Stadjuhar) were whatever lies beyond distant bells (distant silent screams?) and of course the Oilers also sent away Mike Krushelnyski and Marty McSorley in the same deal.

I spent many days with John Short after that, discussing how the deal went down (it is all well known now) and the fracture that deal had caused with 99. I think there was a real effort to put the deal back in the box from the Sather side, but it was too late to turn back by then. Suspect there is a lesson for Darryl Katz in there, should he choose to learn it.