CHIARELLI’S OILERS: HOW ARE THEY BRUIN?

Shortly after Peter Chiarelli arrived as Edmonton Oilers general manager, the club drafted Connor McDavid. These 16 months after PCs arrival, the Bruinization of the Oilers is in full swing, with size and ruggedness being added to 97 and some other skill.

A lot of attention has been paid to the size and grit added, but the Stanley Bruins were a pretty talented bunch. One of the main problems I have with his current roster? There is a massive issue on the forward lines that remains unaddressed. A good way to expose the problem is to look back to that 2011 Bruins club. 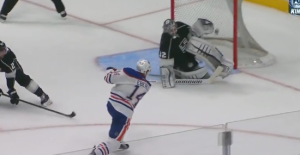 All things being equal, I prefer the Oilers projected top line—although the Bruins line was bigger and tougher, with more experience at center. The generational talent that is McDavid gives Edmonton the edge in my opinion. 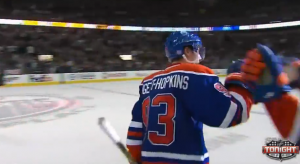 Chiarelli’s Bruins had the advantage of an exceptional center (Bergeron is dreamy) and an up and coming winger in Marchand. Edmonton has some of the pieces of an effective second line, but badly need RNH to perform at a higher level offensively in the coming season—and a more substantial RW option. Jesse Puljujarvi may end up here. Seriously.

The talent on that Bruins line is terrific, have to give that group the edge. I imagine someone will mention Leon not playing with Hall next season—and that is true and should be factored in.

I think the Oilers top three lines could work out pretty well—but the presence of Kassian in this model shows the team is shy in the top 9F. I am fairly certain Peter Chiarelli has confidence that Kassian can play in the top 9F (I see no reason to count on it) and he is probably happy that JP fell to them in the first round 2016. Me too, but not this year—not to count on it, anyway. Radim Vrbata would have been a strong add for this team in my opinion. Opportunity lost.

As for the fourth line: I do not see a lot of help for Mark Letestu, who for me is a reasonable 4C on a contending NHL team. I know many of you don’t feel that way, but for me he was carting around several poor wingers a year ago.

PS: The team is shaping up in a similar fashion to the Doug Flynn Expos. Frustrating to watch one part of the lineup give back the hard-earned wins delivered by the heart of the order. Frustrating. Frustrating and avoidable. I watched a lot of Tim Raines’ pennant races go down the drain on a GIDP by poor hitters like Flynn, Jeff Huson and Tom Foley.

The reason you want a strong option at every spot in the lineup? To avoid those yellow numbers in the graph above. The Oilers are going to give away what McDavid delivers when he is sitting on the bench. Book it.

135 Responses to "CHIARELLI’S OILERS: HOW ARE THEY BRUIN?"