The RE series (just completed) suggests we are about to see a drastic downturn in rookie Oilers this coming season. That is generally a good thing, although impact rookies are always in season. 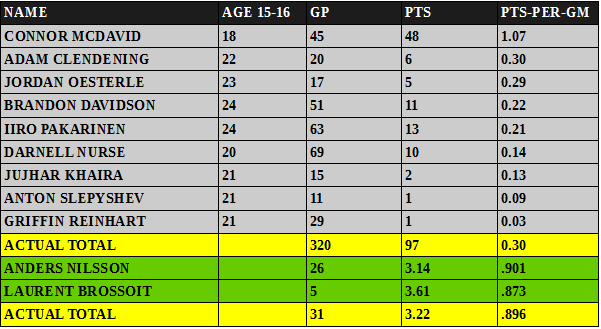 #KHL: Ziyat Paigin, incidentally, not in the lineup for Ak Bars today, although he is with the team on this road trip. #Oilers

Paigin has now missed two games in a row after playing the first two games of the year. This is disappointing, and resembles his handling a year ago (before Paigin was traded to Sochi and blossomed). It could be injury—Russian information on this kind of thing is often slow—but the start of Paigin’s season is not going well. Playing time is important for a young player, this is the kind of thing that can happen to young players in those European leagues. Long season, plenty of track to go.

The Bakersfield Condors have quite a few AHL contracts at this point, and most of them have been spent on physical players. Let’s have a quick look at the group:

A year ago, Bakersfield had AHL contracts like Josh Winquist and Marco Roy, this year (I feel) there are fewer skill players and more beef. The players I am most interested in following in this group? Benik Currie, Descheneau.

HE HAS TO EARN IT!

I had another exchange—it is now over 30, I am sure—about deploying Nail Yakupov on the top line with Connor McDavid. I have suggested for some time that this is a wise idea for multiple reasons—chief among them is that it spreads the wealth over three lines and makes Edmonton more dangerous 5×5. The other major reason I have Yakupov on the top line? He is ill-suited for the Nuge line and I refuse to believe Yakupov need to go on a soft minutes line ahead of Puljujarvi. 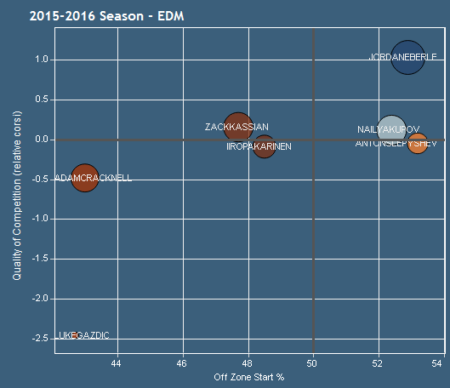 Yakupov is in an area of the graph where we would want to see more production, but remember he was also hurt so part of last season was spent at less than 100 percent. Yakupov playing with McDavid makes so much sense, and the only argument against it is ‘he hasn’t earned it’ and that isn’t really an argument that holds water. If the Oilers are determined to win as many games as possible, then spreading the wealth over the entire roster makes sense. Nail is a divisive figure, I get that, so let’s frame the issue a different way. Let’s ask ourselves all the ways we can find three somewhat equal lines on this team? Nail on Connor’s wing: It’s the right thing to do.

A fun, busy show with a universal theme. 10 this morning, TSN1260 and scheduled to appear:

SALE ON SAIL ON SAILOR

START AS YOU MEAN TO GO

74 Responses to "NO SUGAR TONIGHT"