The Edmonton Oilers have a bushel and a peck of defensemen across the hockey universe and surely some of these fellows will make it to the NHL. We have some news on prospects, and here we go!

He played another game yesterday, after having missed a few. His line now runs 3gp, 0-0-0 (with an explanation) and he is running 17:08 a night for Ak Bars Kazan. We received a fabulous update yesterday in the comments section, and here it is:

The start has been a little slow offensively, but Pink Socks telling us about the power-play time is encouraging. This is an interesting player, hopefully we get to see him next fall. Thanks, Pink Socks!

A full, healthy season is all I ask. Important year for this young man, the second round is where Edmonton’s draft picks go to die.

Former Oilers draft pick Keven Bouchard—who is not signed and is a free agent—will apparently attend Oilers training camp before returning to the QMJHL for his 20-year old season. The exhibition season is underway, and Bouchard is among three Moncton goalies who have seen action:

Bouchard’s body of work since draft day has been poor, but there were some interesting signs last year. He ran a .909 playoff save percentage this spring (17 games) and that is the first SP over .900 I recall for this player.

I love this scouting report! Not many kids would throw in the downside, good for him. I love this pick, not just because this is my favorite player type—but because Edmonton simply doesn’t have many of these ‘range of skill’ skaters. Excellent choice if the club had made it in the third round, stellar pick from the sixth round. 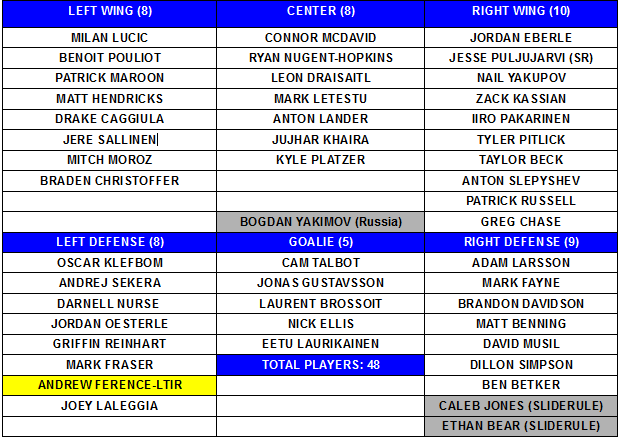 We arrive at the Labor Day weekend with this roster, friends. After a turbulent summer and a monster trade, Peter Chiarelli is both the least popular general manager since the last guy and the first one to address balance since Kevin Lowe. I gave him an incomplete grade earlier this week, and believe it is fair. The summer you trade Taylor Hall is the summer you also give yourself (and your coach and team) their best chance to make the playoffs. PC isn’t there yet, and we know he feels the same way.

Tyler (who is a must-follow on twitter) also pointed out that Bob mentioned Cody Franson and Dennis Wideman as having been discussed. Both men have been talked about on this blog and elsewhere over the piece, I would prefer Franson but either man offers the Oilers a chance to address a need. I think Franson would be able to handle third pairing and be able to help on the power play, Wideman (to me) is a bit of a wildcard based on his most recent season.

Peter Chiarelli has cut down the shopping list and given balance and structure to the roster. You may not like the summer trade (I did not and expressed it) but there is no denying that he tackled some of the heavy work of finding a balanced roster. After these chores are done? Depth. PC has worked long and hard on improving that area too, especially in the area of college procurement. The four horseman may do a fine job of covering for that wobbly 2014 draft.